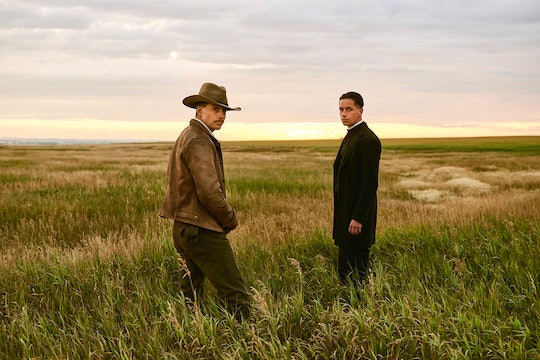 'Damnation' Takes On A Real Period In American History

USA Network is debuting a brand new series, but instead of focusing on the unnerving creepiness of a city like in Mr. Robot or on the slick boardrooms of Suits, the new show will take on a historical subject. This may lead people to wonder, is Damnation based on a true story? Well, the setting and time period of the show are definitely real. The actual plot, however, doesn't look like it's based on true events from the research I've done.

Damnation takes place in the dusty and depression-ravaged streets of Iowa in the 1930s. But this show is about more than just its cool, old-timey setting. The official site for the show describes it thus: "An epic saga about the secret history of the 1930's American heartland, Damnation centers on the mythic conflict and bloody struggle between big money and the downtrodden, God and greed, charlatans, and prophets." It may not be ripped directly from the history books, but the bloody struggle between big money and the downtrodden is as classic a story as ever there was. Basically, the events of this story might have happened somewhere at some point, but there is no proof that it ever literally did happen. Does that make sense?

The plot focuses on Seth Davenport, a small-town Iowa preacher who is really trying to lead a revolution. Meanwhile, a professional strikebreaker named Creeley Turner (really) has been hired by an industrialist tycoon to quash any insurrection as soon as possible and by any means necessary. Naturally, these two men share "a secret, bloody past." In an interview with the New York Post, the show's creator Tony Tost describes the story in a little bit more detail. He is the main writer for the show, and explains that while he didn't intend for the story to be allegorical, it does reflect issues that seem to constantly pop up in history.

I wrote the first two episodes, like, three years ago, but contemporary history keeps making the show feel more and more relevant. I’m not necessarily trying to do an allegory about the present, but history is very cyclical. There’s some core elemental conflicts and issues that we keep returning to. In a way, the present day almost caught up.

When watching the series, you may notice that in addition to reflecting some problems of the 21st century while being set in the 1930s, it also has the feel of an old-school Western movie, which of course take place sometime in the 19th century. "It was a convergence of love of the genre but wanting to find a different storytelling arena so I wouldn’t just be rehashing the greatest hits of my favorite movies," Tost said.

Early reviews of the show are generally positive, praising the way it pays homage to the Westerns that came before it, as well as its two charismatic leads, the anti-heroes Seth and Creeley (still giggling over that name to be honest). Vulture writes that, "Damnation enjoyably mines the weird footnotes of American history for all they are worth." The show describes itself as the untold story of the American labor movement, so this makes sense. Of course, some of these reviews also say that the story is somewhat lost amongst the denseness of the plot, side-characters, and generally rich tapestry.

Personally, I'll take a little denseness of history at the expense of character development. There's always time to develop character motivations, but world-building takes even more attention to detail and has to happen before anything else. True or not, I'm looking forward to this Western-style story.