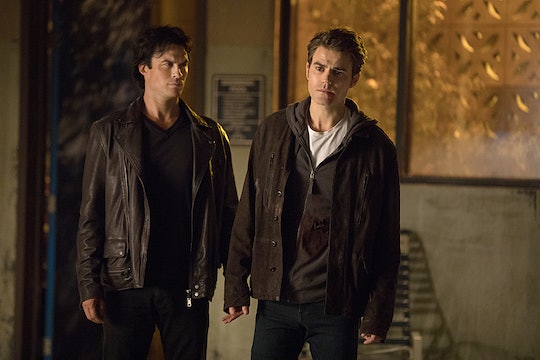 Is Damon Dead On 'The Vampire Diaries'? Alaric Made A Shocking Decision

To say that Friday night's episode of The Vampire Diaries titled "Detoured on Some Random Backwoods Path to Hell" was action-packed would be a bit of an understatement. Not only were Caroline and Alaric's twins this close to a life of servitude at the hand of Cade, but we also seemingly witnessed Alaric kill Damon on The Vampire Diaries. But is Damon really dead? Don't panic just yet, my friends.

Granted, even I found myself gasping in disbelief when I saw Matt and Alaric viciously attack Damon at the Mystic Grill. Alaric and Damon used to have one of the best bromances on the show, so it was heartbreaking to see such a drastic alteration in their friendship. Of course, Damon did just help abduct Alaric's children and use them to his own advantage, so yeah, I kinda get it. But still! I didn't think he would go so far as to plunge an actual stake into Damon's heart.

And while, yes, that would usually mean immediate death for a vampire (unless you last name is Mikaelson), it's important to remember the deal Damon and Stefan just made with Cade. Because while they may have been immortal before now, this new agreement makes it so not even stakes can bring them down.

Understandably, fans became instantly concerned for Damon's fate. Seeing his skin turn that gray-ish color is never a good sign and left many wondering if this was the end of the line for TVD's favorite bad boy. However, if you were able to pause your sobs long enough to watch next week's promo, you undoubtedly saw that Damon was featured heavily in the clip. In fact, Caroline even goes on to confirm that he is alive. So rest assured this was not the last you've seen of Damon.

As Stefan explained to Caroline, in order to save the twins, he had to make an even better deal with Cade, which meant offering him two vampire brothers. (Yes, I sadly mean Damon and Stefan.) Much like what Sybil and Seline had to do, Damon and Stefan will now be the ones to recruit and collect sinful souls and send them down to Cade in hell. And while that sounds absolutely terrible, the good part is that the arrangement makes them more immortal than ever before.

If I'm right, then stakes are no longer a threat to them because they aren't just vampires now — they're Cade's sirens, which makes them pretty indestructible. And honestly, it couldn't have come at a better time, given Damon's current situation. So fear not my fellow TVD fans, Damon Salvatore will live to see another day.