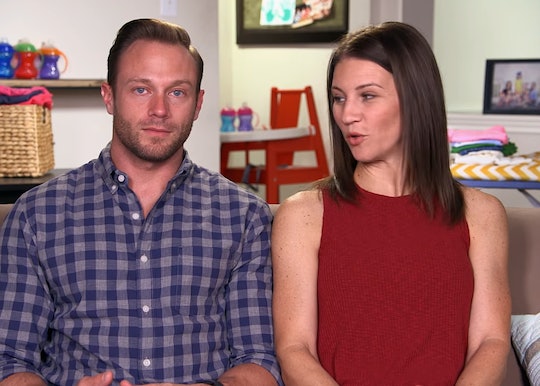 Danielle and Adam Busby went from having one daughter to having six when Danielle became pregnant with the only all-female set of quintuplets in the country. Though they love their big family, Danielle and Adam agreed that was enough kids for them and Adam got a vasectomy. However, in an exclusive clip of the next episode it seems that vasectomy may not have done its job. So is Danielle pregnant again on OutDaughtered?

In the new episode, Danielle's period is late which, as every one knows, can be a tell-tale sign someone is pregnant (at least it's the most obvious). However, Adam got a vasectomy so this should not even be a concern, right? Well, not quite. According to the American Pregnancy Association, there is still a less than one percent chance of pregnancy after a vasectomy. While these are incredibly low odds it is recommended that men have a semen specimen analysis (SSAV) after their vasectomy to determine the success of the procedure before they stop using alternative methods of contraception. In the new clip, Adam reveals that he had never had this analysis done.

"With all the craziness of having premature infants at our house and the feedings and the diaper changes and everything else that goes along with that that just eventually slipped my mind," he tried to explain in the clip with Danielle. His wife was not having it, however. "This is BS coming out of your mouth," she said. "Do you really want more kids?" Adam said no.

Following this revelation, Danielle was rightfully upset. Adam tried to justify not going back for his follow up appointment because he had "the best doctor in this whole area," but Danielle was not having it. "It doesn't matter if you don't ever go get checked out afterwards, you don't know if you're spitting zeroes," she said.

Danielle then revealed that she was still late so she could very well be pregnant. Adam then suggested that Danielle take a pregnancy test, but she refused to take one until Adam finally went to his follow up appointment. Adam argued that they could know right away if Danielle was pregnant if she just took a pregnancy test, but then she argued that it could be too early to detect. Adam then promised he would go get everything checked out the following day. Hopefully, for his sake, the vasectomy did take and Danielle is just late for some reason, because if it did not and she is now expecting again she will be even more upset with him.

Still, though Danielle and Adam were not planning on having another baby, the two would most likely decide to step up to the challenge. Sure, their family is already quite big and with so many kids who are still so young it would definitely be a lot to bring a new born into the house. But if anyone could do it it would be Danielle and Adam. These two have faced a lot together, both good and bad, over the course of the series. If Danielle is, in fact, pregnant there is no doubt they would be able to handle it, if they decided to continue the pregnancy.

It is also, of course, their right to choose to terminate the pregnancy if it would just be too much, but it is highly unlikely that the couple would choose this route because of their Christian faith. Though this was unplanned, it is most likely that they would see the pregnancy through. Hopefully, this will just turn out to be a false alarm though and Danielle and Adam will not even have to worry about making that choice.

OutDaughtered airs on TLC on Tuesdays at 9 p.m. ET.