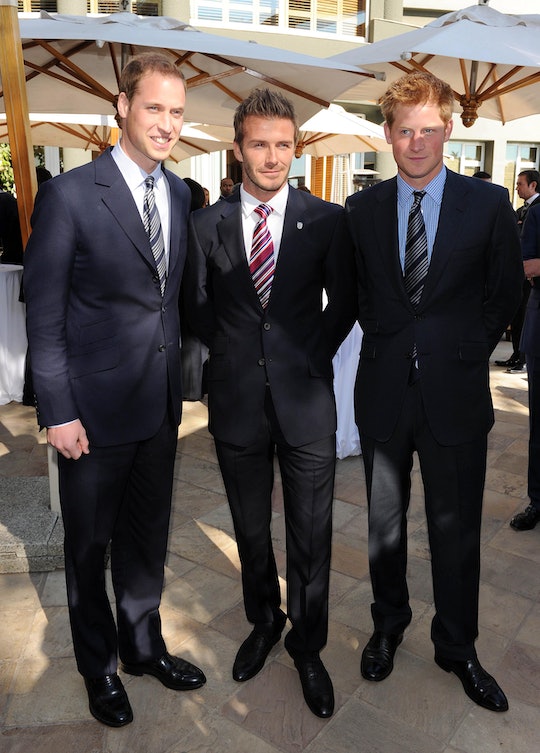 David Beckham Made A Very *Posh* Appearance At The Royal Wedding

It was one of the biggest questions of the royal wedding as guests were pouring in: Which celebrity showed up now? Big time celebs like Serena Williams and Priyanka Chopra were definitely in the chapel when Meghan and Harry got married, but I was really on the edge of my seat waiting and wondering if I would see David and Victoria Beckham were at the royal wedding. Did Posh Spice get up this morning for hair and makeup befitting a royal wedding? If so, what did she wear? And which hat did she accessorize her dress with? Well, now I know.

Victoria Beckham didn't confirm nor deny whether they would be heading to the royal wedding during her appearance on The Late Late Show with James Corden in April. Which made Corden believe that she was hiding a very big "yes" with her hedging. But now it is officially confirmed that David Beckham was in fact at the royal wedding this morning with Victoria and they both looked perfect.

But this shouldn't be too surprising, considering David called both the princes his friends in an interview with Esquire. When asked if he would consider Prince William his friend, he replied, "Yeah, I think I would. We've done a lot of functions together. It's a very normal relationship. With Harry, as well. They're very easy to get along with." It does make sense, considering the Beckhams are practically British royalty in their own right. And it's a good thing he got the invite or things might have gotten a little awkward over there in the British Isles!

Meanwhile, Meghan Markle and Victoria Beckham appear to be friendly as well. Markle has been wearing pieces from Victoria Beckham's clothing line throughout her travels around the British Isles, including a simple cream cream cashmere sweater (photo below), reported Yahoo Lifestyle. And of course, once Markle wore the sweater, it sold out everywhere, because Markle appears to have the same affect on fashion fans as her soon-to-be sister in law, Duchess of Cambridge, Kate Middleton: Anything they get photographed wearing gets sold out before you know it.

The princess (or future-princess) effect is likely welcomed by Victoria, whose fashion line has been struggling in the last few years. Business Insider reported, "Losses rose from £4.7 million in 2015 to £8.4 million in the year to December 2016." But if the new princess keeps wearing her clothing line, that might turn things around.

Markle and Victoria allegedly became "chummy," according to Vanity Fair, especially since moving to London, sharing beauty and fashion advice. It was even speculated that Victoria was designing Markle's wedding dress, though Victoria never confirmed nor denied it leading up to the event. Beckham and Markle reportedly "share a similar sense of style, a passion for beauty products and treatments, and messy buns," said Vanity Fair. Harper's Bazaar explained that the two seem to both understand the benefit of a great wool coat, a trouser suit and wide-legged pants.

I did expect David and Victoria Beckham to be at Prince Harry and Markle's wedding this morning, in part because they wrangled an invitation to the last royal wedding. Business Insider reported that David Beckham not only attended the Duke and Duchess of Cambridge's wedding back in 2011, he also managed to have a bit of a sartorial mishap while he was there. The soccer star has been awarded the Order of the British Empire medal for his sporting achievements, and wore the pin on the wrong lapel. Whoops! Showing up to a royal wedding wearing your royal medal wrong isn't a great start. He was obviously informed, because he switched the medal to the other lapel later in the morning.