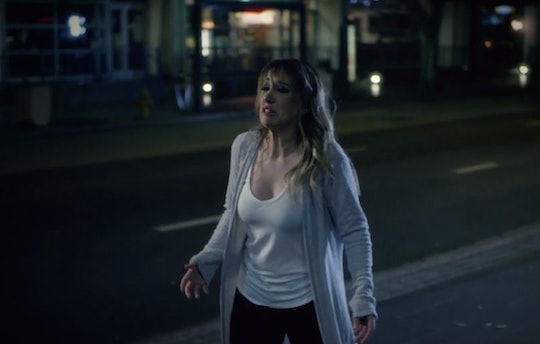 The Premise Of Lifetime's Latest Movie Is Terrifying

Lifetime is known for its chilling films about families and relationships. Sometimes, they're ripped right from the headlines. Other times, they're totally fictional, which should be considered a good thing. Luckily, one premiering this Saturday, titled Deadly Delusions, is not based on a true story. And once you've seen it, you'll be thankful.

According to the synopsis, the movie centers around a "troubled New York woman" who moves to Los Angeles with her new boyfriend. She settles into a fancy new house and starts to relax, but then mysterious things start to happen. "It's not long before Julia becomes convinced that her demons have moved with her," the Lifetime description reads. The only problem is that Julia, played by Haylie Duff, doesn't have anyone who seems to be on her side, with even her doctor, played by Teri Polo, questioning the things she talks about, like stalkers and strange men. It's pretty intense. Although stalking is definitely real, this particularly terrifying story doesn't seem to be based on a specific event.

Duff, who is the sister of actress Hilarie Duff, is still getting back into the swing of being a working mom. The actress has an almost 3-year-old daughter, Ryan Ava, with husband Matt Rosenberg, and she's hoping to set a good example for their child. Though hopefully not by letting her see this thriller. "I feel like I’m setting a good example for her. That’s what I keep telling myself," Duff told People during an interview back in 2016 in regards to her return to work. "It’s a little bittersweet, but we’re doing a little family trip when I get home, so it’s all good.”

Both Duff and Polo (the latter of whom you might recognize from The Fosters), have starred in tons of Lifetime and Hallmark movies, and they're also both moms (Polo has a 15-year-old boy and a 9-year-old girl). So there was likely some bonding on set, however, Polo herself has admitted to feeling guilty about being away from her kids, telling Parade magazine:

I’ve had stuff with both of my kids. I go up and down. I literally was crying to my boyfriend the other night going, 'I just feel like a horrible mother,' so I think we all question [our parenting skills], no matter how big or small the difficulty might be with teenagers.

Like Polo, Duff also has other gigs going on as well. In addition to acting in movies and TV, she also runs a lifestyle blog, Real Girl's Kitchen and released a cookbook. She also has her own kid's clothing line, called the Little Moon Society, and just announced that she's pregnant with a second child, so this might be her last movie for a few months, at the very least.

If Deadly Delusions looks scary, it's nothing compared to the pressures one can face with the prospect of being a new mom again. But Duff seems to be looking forward to tackling the task head-on because, in the end, it's all worth it. "There isn’t a clear-cut way to be a parent," Duff told Mini magazine over the summer. "We will all make mistakes. Sometimes it all comes crashing down but there is such beauty in the chaos."

Whatever obstacles Duff may find herself facing in every day life, that's nothing compared to what her character will have to go through in this new Lifetime movie. After days on that creepy set, it must have been extra nice to go back to her loving family.