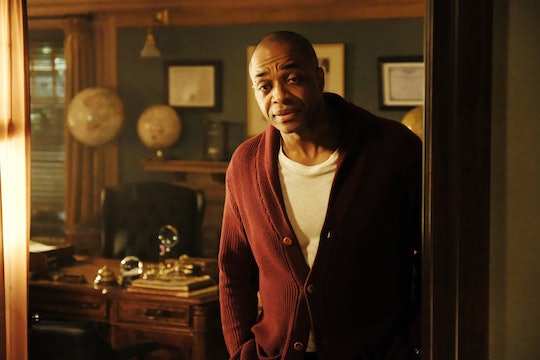 Dean Fogg Has Difficult Decisions To Make On 'The Magicians'

In the Season 3 finale of The Magicians, Dean Fogg made an uneasy alliance with the Library that left magic carefully portioned — and scattered the protagonists around New York City with new identities. His decision changed everything, but is Dean Fogg still working with the Library on The Magicians? The new state of things isn't the best arrangement for anyone, but it should give the show a lot to untangle when it returns to Syfy on Jan. 23.

It seems like a fair assumption that Fogg is still working with the Library to some extent. He has to if he wants access to any kind of magic at all. With the Librarians controlling the siphon and rationing magic as they see fit, everyone who wants to cast spells will have to bend to their rules, Fogg included. Actor Rick Worthy said as much during a conversation with Black Girl Nerds ahead of the new season. According to him, Fog would be "sort of this business man, politician kind of guy" in Season 4. Though he would be reporting to the Order, he didn't enjoy doing so at all. In fact, he hated it.

Fogg's inner conflict over the deal he struck could cause his loyalties to shift this season.

The trailer for Season 4 focuses on the characters chafing under the Library's control, but Fogg's position in the dispute is hard to pin down. He's not shown taking drastic action against the Library, but he does have some knowledge of their inner workings. He reveals that the Library would know if the main crew got their memories back, which is presumably insider information. Like Worthy said, he might be acting like a politician: determining what decisions benefit everyone and playing the long game to make that happen.

But even if Fogg is toeing the company line early in Season 4, that might not be the case forever. In the trailer, he also says that he wouldn't underestimate the will of his students. He knows what this ragtag group of magicians is capable of; they'll do anything to make things right and protect the magical world. They won't let the Library's reign last for long, and it's hard to imagine that Fogg wouldn't side with Quentin, Julia, and company if it came down to it. He worked with the Library out of necessity, not because he's their biggest fan.

Fogg was already having issues with the Library in the final moments of "Will You Play With Me?" Brakebills' magical supply was too measly to support its student body, which left him bartering with the lead Librarian and filling out paperwork in triplicate just to get a little more. He was also still in contact with imprisoned Alice. She's the one character who knows exactly what's going on with the Monster and she begged him for help. She wanted Fogg to let her go so that she could right the wrongs they made.

My theory? Fogg will be working with the Library for part of Season 4, but he's not truly on their side. He's using his connections to make sure magic is available to everyone, even if it's not as free-flowing as it was in Season 1. Since Fogg is definitely not a true team player, there's a good chance he'll become something of a double agent. Fogg will do whatever it takes to keep Brakebills open, even if his choices aren't the most popular.