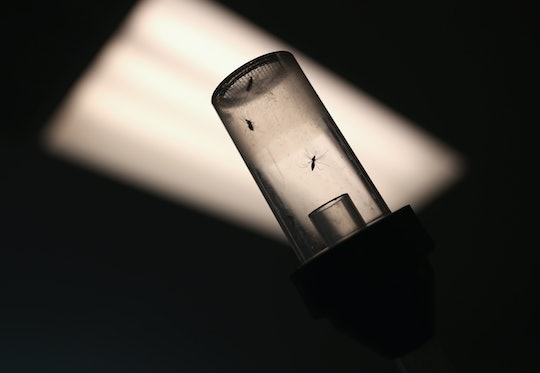 Is DEET A Carcinogen? It's Safe In Specific Concentrations

With Zika causing scares reminiscent of avian influenza and West Nile virus, mosquitoes are enemy No. 1 throughout the Americas at the moment. Aedes aegypti, a common mosquito, can transmit Zika, a virus that has been linked to microcephaly in fetuses and neurological diseases in adults. As people reach for their insect repellent, some might be wondering whether one chemical-sounding ingredient — DEET — is actually safe. Is DEET a carcinogen, and is it something you want to spray on your your body or your children's? Because, while Zika is a real threat, it's also important to find the safest way to keep those mosquitoes at bay.

DEET is a common ingredient in mosquito repellents, and it's been used for more than 50 years after it was developed for the U.S. Army. It works as sort of an invisibility cloak for mosquitoes, making it difficult for them to smell humans. According to the Environmental Protection Agency, approximately one-third of Americans use DEET every year. The substance was reviewed for safety in 1998 and 2014 by the EPA, and passed both times, although the agency placed DEET in its Toxicity Category III.

That sounds scarier than it is — basically, the EPA labeled DEET "slightly toxic," since it can be (through oral, dermal, and eye routes). The repellent is also a Group D carcinogen, which means there isn't substantial proof one way or another that it's carcinogenic to humans. However, if used in accordance to instructions, EPA doesn't think DEET presents a risk to the general population.

That said, DEET has been linked to some harmful effects, especially if high concentrations of it are used long-term. According to the U.S. government's MedlinePlus, some of the less nocuous effects include mild irritation and hives, which will go away once you shower off your mosquito repellent. If DEET is sprayed into the nose, eyes, or mouth — by accident or because you have curious little children — people will feel a burning sensation, which can usually be fixed by rinsing thoroughly with water, although eye burns may have to be treated medically.

Swallowing DEET can lead, unsurprisingly, to nausea, vomiting, and low blood pressure and heart rates — but, realistically, you're not using your mosquito repellent as a sports drink, and you should be keeping your repellents out of children's reach.

The more dangerous and worrisome potential effect of DEET poisoning is neurological damage, which can include seizures or comas. The risk is higher for children, and MedlinePlus states:

DEET is especially dangerous for small children. Seizures may occur in small children who are consistently exposed to DEET on their skin for long periods of time. Care should be taken to only apply lower concentrations of DEET to children for short periods of time. Products containing DEET probably should not be used on infants.

However, if you follow directions while using DEET and don't overdo its usage, it's fairly harmless. You'll also want to be mindful of the percentage of DEET in the repellent you use, as it's correlated with how long the protection lasts. According to North Carolina Public Health, 10 percent DEET should cover you for about two hours, while 24 percent DEET has been shown to provide five hours of protection. However, there's no increased efficacy with concentrations of more than 50 percent, and the higher concentrations can bring on more toxic effects, so you'll want to figure out the right coverage for you and apply appropriately.

If you'd rather stay away from DEET, your next-best repellents should include picaridin, IR3535, or concentrated oil of lemon eucalyptus. Against the risk of Zika, most repellents are a better option if used wisely.