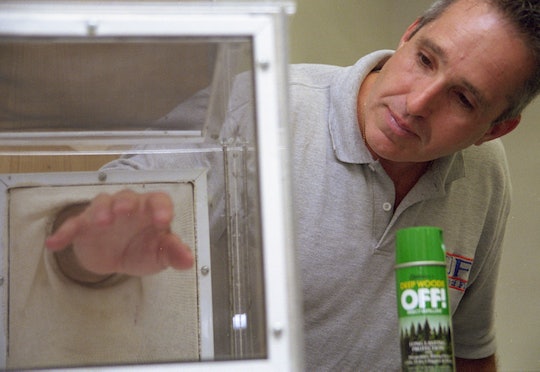 Is DEET More Effective Than Picaridin Against Zika? The Virus Has Gotten Worse

In a day and age where the public has been conditioned to fear "chemicals" at all costs, it can be hard for anyone, particularly pregnant women, to feel safe in their own skin. Add the threat of the Zika virus into the mix, and it's a terrifying time to be alive. For pregnant women who can't avoid Zika-prone areas, the Centers for Disease Control and Prevention recommend avoiding mosquito bites, and that means (in part) using insect repellent, including those containing DEET or picaridin. But rather than asking whether DEET is more effective than picaridin, consumers should pay more attention to the concentration of each chemical in the products they're using. Yes, pregnant women, you need to use chemicals, because they're far less risky than contracting all-natural Zika virus.

Both DEET and picaridin are effective at preventing mosquito bites, and when used as directed, both are safe to use while pregnant. The CDC recommends using DEET in a concentration of up to 30 percent, or picaridin in a concentration of up to 20 percent. Whichever product consumers choose, it should be compliant with the Environmental Protection Agency's guidelines, which means none of that plant oil stuff. Those products are not registered with the EPA, and what's more, Consumer Reports found that "none lasted for more than one hour against Aedes mosquitoes, and some failed almost immediately." I know you Earth-mamas out there love your California Baby and Burt's Bees products, but this is no time to mess around, because microcephaly is a lot more serious than the vague threat of "toxins."

Yes, both DEET and picaridin are great, but that doesn't mean that any old product that contains one of them is a magic bullet. Out of the 15 products tested by Consumer Reports, only five were recommended by the publication, and looking at their testing results, it's easy to see why: while Sawyer Fisherman's Formula contains 20 percent picaridin, and repels the Aedes mosquito for 8 hours, Off! FamilyCare Clean Feel contains just five percent picaridin, and it only repelled the Aedes mosquito for half an hour, according to Consumer Reports. Then we have Off! Deepwoods VIII, which contains 25 percent DEET and repels the Aedes mosquito for 8 hours, versus Cutter Skinsations, which only has 7 percent DEET, and is effective for a mere 1.3 hours, according to Consumer Reports.

When it comes to the two insect repellents, it doesn't much matter which one consumers choose — even if they're pregnant — as long as it's manufactured in an effective concentration and applied correctly (read the label and check out the CDC's guidelines for more information). Choose whichever one is cheaper. Choose the one that smells best. Pregnant women should choose one that's Consumer Reports tested and approved, and for goodness' sake, pregnant women shouldn't rely on lemongrass oil and wishes, because it could put them at a greater risk for contracting Zika.