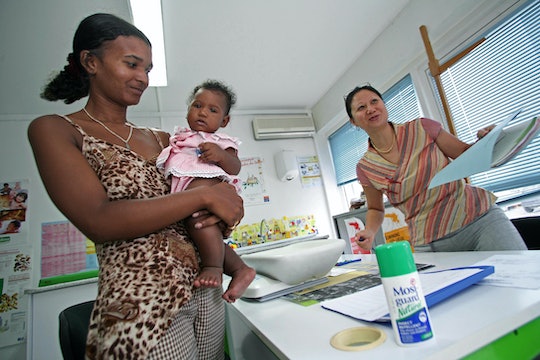 Is DEET Safe For Pregnant Women? Zika Is Worse & Bug Spray Is Necessary

Zika, the mosquito-transmitted virus that has been linked to microcephaly and two neurological disorders, is like a nightmare that won't end. Aedes aegypti — the mosquito that transmits Zika — is present in up to 30 states, and the more researchers learn about Zika, the more reason for worry there seems to be. The virus can affect fetuses throughout a longer period of pregnancy than previously thought, it can damage newborns' vision, and it was recently linked to symptoms similar to those seen in multiple sclerosis. Considering the risk of Zika, is DEET safe for pregnant women? Because there is definitely good reason to be investing in bug spray, and all-natural mosquito repellents just aren't quite as reassuring as some good old-fashioned DEET.

According to the Center for Disease Control and Prevention, DEET is safe to use throughout pregnancy, although the organization recommends using repellents approved by the Environmental Protection Agency (and that goes for everyone, not just pregnant women). The CDC also doesn't recommend using a two-for-one sunscreen and mosquito repellent combo, since it may make the repellent less effective. Instead, just apply sunscreen first, then spray on your DEET. Make sure you're also following application instructions on the repellent you're using, so that you're not overdoing it — or not applying often enough.

I completely understand the desire to stay away from chemicals while pregnant (or not), and admittedly, the long-term effects of DEET aren't known. But Zika has been linked to life-threatening conditions, and the risk of going without mosquito repellent in Zika-affected areas is definitely higher than the potential risk of using DEET during pregnancy. "Really, there's not any strength of evidence indicating that DEET is harmful to a fetus or harmful to a person," Dana Boyd Barr, an exposure science professor at Emory University, told Live Science.

Since there is no vaccine for the Zika virus, your best bet is to prevent mosquito bites. Wear long-sleeved shirts and pants and use repellent as needed. Zika can also be sexually transmitted, so if either you or your partner has been in an area affected by Zika, make sure to use condoms. According to the CDC, the virus can live in semen longer than it can live in blood — although how long has not been established yet — so it's important to use protection, especially if you're pregnant.

Other than that? DEET away. The EPA has a handy guide to choosing the right repellent for you depending on protection time and active ingredients, so if you're in a Zika-affected area and have a baby on the way, start spraying.