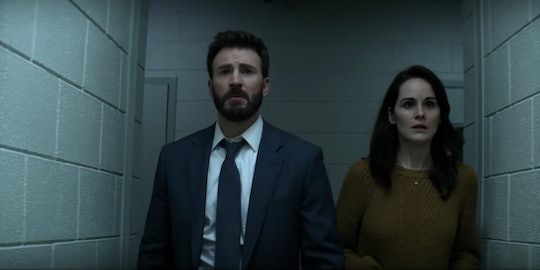 'Defending Jacob' On Apple TV+ Tells A Chilling Story, But Is It Based On Real Life?

Those who are obsessed with true crime have probably come across Defending Jacob, a new Apple TV+ series that centers around how two parents deal with their teenage son being accused of murder. It's fascinating, stressful, and chilling, but is Defending Jacob based a true story?

In the Apple TV+ series Defending Jacob, Chris Evans plays Andy Barber, an assistant district attorney who is tasked with prosecuting the murder of one of his son's classmates. But when clues begin to suggest his own 14-year-old son Jacob (played by Jaeden Martell) may have been the murderer, Barber and his wife (played by Michelle Dockery) set out to prove their son is innocent — they think.

While based on William Landay's 2012 novel of the same name, Defending Jacob is not entirely based on a true story. In fact, Landay told HuffPost a few years ago that while he does "borrow" things from real life, he ultimately ties to avoid using "real cases" in his novels. "As a former prosecutor, I am uneasy with the idea of exploiting these stories," Landay told HuffPost in 2014. "I would hate to think I ever added to a victim's pain."

The author went on to explain that he tries to "balance these two conflicting aims: to use real cases as inspiration but then to abstract them so far from where they began that the original cases will be unrecognizable in the finished novel." According to Landay, various aspects of Defending Jacob were inspired by many different real-life cases, many of which were local to the Boston area where he lives. "To Bostonians, I’m sure, those details are recognizable," he told HuffPost.

A few years earlier, in an interview with the Seattle Post-Intelligencer, Landay revealed that one of the real-life cases that inspired the story behind Defending Jacob was that of Joey LaMarca and his father, a Long Island detective named Vincent LaMarca. "I read a story about a Long Island detective who was the son of a convicted murderer," Landay explained. "This detective was a strict law-and-order man, but his own son was subsequently accused of murder, just as the detective's father had been."

Landay told the Seattle Post-Intelligencer that the LaMarca case, which later inspired the movie City by the Sea, was the first time he'd ever come across discussion about "the murder gene," a DNA genetic variant some scientists have suggested makes some individuals predisposed to committing acts of violence.

So while the plot of Defending Jacob is pure fiction, smaller details in the book, and subsequently the Apple TV+ series, were drawn from Landay's personal life. "I was an Assistant DA for several years in the 1990s, and many of the details in the book grew directly out of that experience," he said in an interview with his publisher, Random House. "The prosecutor's office portrayed in Defending Jacob, the Middlesex County (Massachusetts) DA's Office, is the same one where I worked — though the characters themselves are entirely fictional."

Despite Landay's sources of inspiration, Defending Jacob is overall more crime drama than true crime. You can stream the series now on Apple TV+.