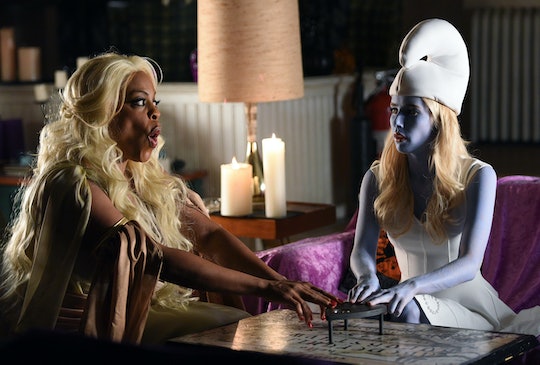 Is Denise Dead On 'Scream Queens'? Niecy Nash Can't Be Gone For Good

If you thought you were sad when Chad Radwell died on Scream Queens, you better get ready for even more heartbreak. When we last saw her, Denise was trying to save Chanel Number Five (with a knife in her back), when she was attacked and possibly killed by the Green Meanie via a defibrillator. Is Denise actually dead on Scream Queens? If she is, I honestly don't know if I'll have the heart to keep watching.

Once we had lost Chad, though my heart was broken, I comforted myself with the knowledge that at least we still had Denise Hemphill, who was committed to finding the murderer in the most hilarious way possible. Unfortunately, it looks like she might have been honestly killed in the last few moments of the episode. This was not even her first run-in with the Green Meanie. Earlier in the episode, when he/she tried to come after her, she fought back like a champ, slapping the villain on the chest and knocking him/her over right before pulling her gun out. Don't even think about coming after Denise, I thought. You can't take her down! Now, how sadly mistaken I fear I was. What will I actually do if it turns out she is dead?

The only comfort (and it is a cold comfort) in the dastardly attack on Denise and Chanel Number Five, is that at least we have another clue as to who exactly the Green Meanie is. Because it sure looks like Denise was getting close to figuring out who the killer was, and maybe the Green Meanie decided to just off her to save his/her own skin. The person who directly benefits the most is, obviously, Hester. With Denise out of the way, Hester is pretty much free to roam about as she likes, as there is nobody around to lock her back up. And from the looks of next week's preview, that's exactly what she's doing. In hindsight, maybe we should have seen this tragedy coming.

I still can't bring myself to believe that Denise is actually gone for good though. I still have my fingers crossed that she's going to make some sort of Jon Snow-esque miracle return. Pretty please?