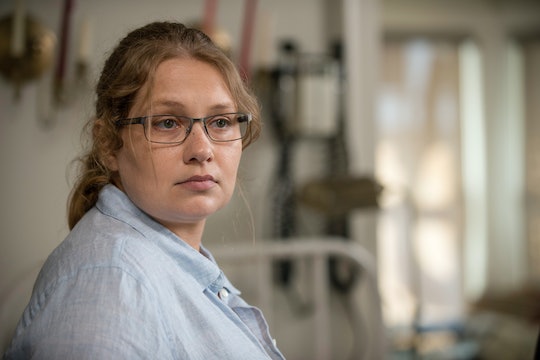 Is Denise Dead On 'The Walking Dead'? Her Death Was Imminent

Another one bites the dust. The last few weeks of The Walking Dead's sixth season have been tense and the death of another regular character seemed imminent. However, even with the audience waiting with bated breath for something terrible to happen, it was impossible to predict the sticky end that met Dr. Denise. A mysterious arrow through the head cuts her off right in the middle of an intended-to-be-rousing speech about living life and though she keeps talking for a moment afterwards, it's definite: Dr. Denise is dead on The Walking Dead.

Denise wasn't exactly a fan favorite; the Alexandrians have had to work twice as hard to prove themselves thanks to the cushy lifestyle they've been living since the virus first appeared. But she's been doing her best and trying to power through the apocalypse despite the odds stacked against her. A psychiatrist in her prior life, Denise took on the role of town doctor after the death of Jessie's husband Pete and she's been doing a decent job, managing to save Carl when it looked unlikely. She's also forged a romance with Tara, only proving that the closer a character comes to some kind of success and normalcy, the more likely they are to kick the bucket.

Denise's death is another instance of the show taking a moment from the comics and altering it a little – probably to keep the audience on their toes. In the comics, Abraham was the one to get the arrow through the eye, but he's now become another character who has survived after his comics expiration date passed. The perpetrators made themselves immediately apparent — Negan's group, called the Saviors, emerged the surrounding woods also toting Eugene, with weapons trained on a shocked Daryl and Rosita. Our group was grossly outnumbered but they managed to get a leg up anyway, with a lurking Abraham in the woods lending a helping hand. The man who killed Denise also happened to be the very man Daryl was captured by early in the season.

Denise spent the episode courting death, getting herself into potentially dangerous situations just to prove that she was capable of handling herself in a dangerous world. And indeed she was — Denise may have done it in a less than graceful way, but she was able to kill a walker. She could have continued to grow and adapt to the changing world. But if viewers of The Walking Dead have learned anything, it's that the closer a character comes to getting what they want, the closer they are to losing everything.