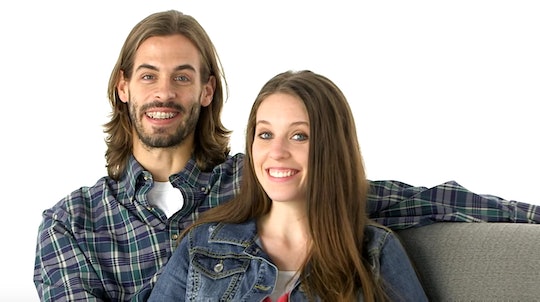 The many members of the Duggar family are always up to something. With 19 siblings in the family (not to mention some of them have spouses), they are always busy doing something — whether it's entering a courtship, having a wedding, or starting a family of their own. Jill Duggar's life is pretty hectic, especially since she has two kids with her husband, Derick Dillard. And after making a post on Instagram on Monday, fans must be wondering if Derick Dillard is in fact going to law school after Jill made one very special announcement on Instagram.

On Monday, Jill shared a photo of her husband on Instagram of him wearing a suit and carrying a briefcase. But, Jill remained coy in the caption of the photo. "Exciting announcement!" she wrote, directing fans to head to her blog, where she updates fans about her life as a mom of two young boys.

Jill's super exciting announcement? That Dillard will be attending law school in the near future in the Duggar family's home state of Arkansas. "We will be remaining stateside for now as Derick is beginning law school at the University of Arkansas," Jill wrote on their blog. "We look forward to seeing how God will continue to direct our family in this new chapter of life!"

Judging from Derick's Instagram post on Monday, it seems as if he had a very successful first day of class. "First day down, a lot more to go!" he captioned the photo.

Derick and Jill aren't the only people excited about this very big announcement. Fans of Jill's took to the comments section of her photo to share their thoughts about the news. "Congratulations," one commenter wrote. "Christian lawyers are needed in this society."

It sounds like Derick can't stay out of the classroom for too long. This summer, he attended the Cross School of Ministry in Fayetteville, Arkansas, according to In Touch Weekly and graduated just two days ago, earning his minister's license, according to the Dillard Family Blog. But it seems like a minister's license wasn't enough for Derick because he is going for a law degree now.

Their blog helps Duggar fans keep up with the Dillard family, especially since the couple is no longer on Duggar's family's TLC reality show, Counting On. Although fans might not get to see what they're doing on camera, rest assured that Jill and Derick have their hands full — between being parents to their young sons, Israel and Samuel, and with Derick now attending classes.

Prior to attending law school, Derick graduated from Oklahoma State University where he received his degree in Business Administration, Accounting, and Economics in 2011, according to LinkedIn. In 2014, her began a job at Walmart as a tax accountant, according to LinkedIn, but left in June 2015. Since leaving his desk job, Derick has been active in missionary work, moving to Central America in 2015 to see "God transform lives," according to People. But, last August, the family permanently moved back to Arkansas. "Through a number of circumstances, and guided by much prayer and counsel, we are discerning the Lord leading our family's full-time ministry back to the United States for the time being," Jill and Derick wrote in a statement at the time.

With a law degree under his belt in a couple years, it'll be interesting to see where this next chapter in life may take Derick and his family.