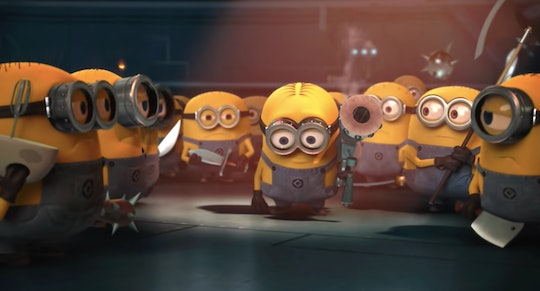 Psst! The Original 'Despicable Me' Is Coming To Netflix So, So Soon

If your family's next movie night could use a few minions, I'm pleased to report that Universal Pictures' beloved 2010 film Despicable Me is coming to Netflix soon. The original installment of the Gru-centered franchise came to theaters nearly 10 years ago, so you may very well have a DVD copy of the movie at home. But if you've done some spring cleaning over the years, your Netflix subscription will certainly come in handy.

Meanwhile, Despicable Me 3, the third installment of the Gru-centered franchise, will be available on Netflix even sooner that the first film. On April 5, to be exact. Despicable Me 3, which hit theaters back in June 2017, follows Gru as he meets his long-lost twin brother, Dru.

In other Gru-related news, the release of the prequel Minions: The Rise of Gru has been pushed back as a result of the novel coronavirus pandemic; the original U.S. release date was July 3, according to Deadline. "While we all grapple with the enormity of this crisis, we must put the safety and protection of our employees above all," Illumination founder and CEO Chris Meledandri said in a statement. "We look forward to finding a new release date for the return of Gru and the Minions."