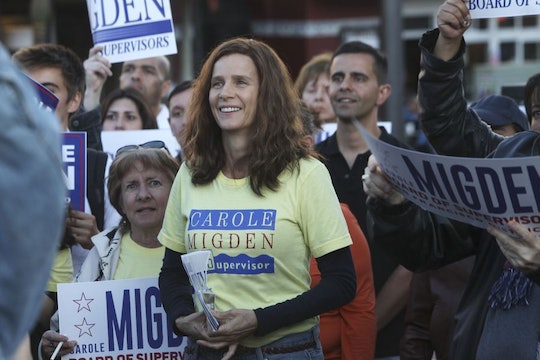 Diane Jones' Story Will Be Told On 'When We Rise'

ABC's five-decade-spanning queer history miniseries When We Rise tells the story of the LGBTQ+ rights movement through the eyes of prominent activists and community organizers at the intersection of race, feminism, and queer identity. Among the stories it tells is that of Diane Jones, played in the miniseries by Fiona Dourif in her younger years and Rachel Griffiths later on, a nurse in the first HIV/AIDS ward in San Francisco at the start of the AIDS crisis. So is Diane Jones a real person on When We Rise? In fact, all the main characters who frame the story are based on real people.

In When We Rise, Jones plays a supporting role as the partner of main character Roma Guy, a feminist activist who comes to terms with her own sexuality as she fights for the rights of her lesbian friends. Viewers will watch as Guy confronts the struggle of being shunned as a lesbian by the women's movement in the 1970s and later as she navigates the AIDS crisis in support of gay men. This is where Jones enters the picture. In real life, Jones' first job out of nursing school was working on one of San Francisco General Hospital's medical-surgery units, which "happened to be the primary destination for all the patients with AIDS, although we didn’t know what it was," she said in a University of California San Francisco profile on HIV care.

When the hospital later opened Ward 5B, the first inpatient AIDS unit in the country, staffing it quickly became a problem. Because of the lack of information about how HIV was transmitted, many hospital personnel didn't want to work with AIDS patients, and subsequently gave poor care when they were forced to work with them. To combat this problem, the ward staffed up on a volunteer basis. Cliff Morrison, the clinical faculty member who was charged with creating the unit, asked patients who they'd like to have overseeing their care.

"Several of the patients said, 'Oh, there are these two nurses on the night shift, and they’re not afraid of us, and they’re gay. You should get them,'" recalled Jones in the same University of California San Francisco interview. She was one of them.

From there, she became an activist on the front lines of HIV/AIDS healthcare, pushing for expansion of access to federal resources, research, medication, preventative care, and education. Jones just retired from her job last year, although she continues to do activism work. She and Guy still live together in San Francisco's Mission District. You can catch When We Rise as it covers her important contributions to queer history beginning on Monday, Feb. 27 at 9 p.m. ET on ABC.