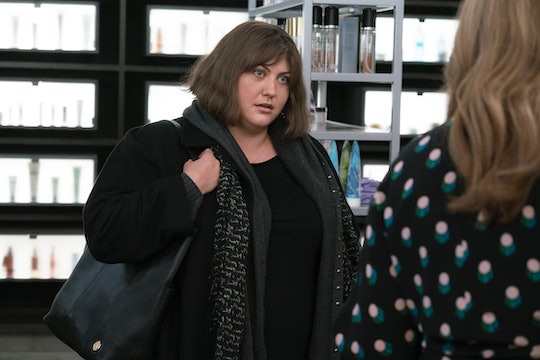 Is 'Dietland' Based On A True Story?

Sweet Vicious meets Drop Dead Diva in AMC's newest TV series, Dietland. The new series follows Plum Kettle (Joy Nash), a ghostwriter for the editor of a New York fashion magazine who struggles with self-image and sets out on a wildly complicated road to self-acceptance. At the same time, around the city, men who were accused of sexual abuse and assault are disappearing and ending up dead. Although the show sounds a little wild, people can't help but ask, is Dietland based on a true story?

It isn't, but it is based on a best-selling novel of the same name. The novel, written by debut author Sarai Walker and published in 2015, was received with high critical acclaim. The premise of the book was slightly different than the show. Plum was answering fan mail for a teen magazine in the novel, not ghostwriting for a fashion mag like in the show. However, the most important aspects of the book seems to still be in the show. Mainly, the guerilla group that goes on the offensive to change a world that mistreats women, and the Calliope House, an underground community of women who reject society's rule. In the TV series it looks like the guerilla group will go by "Jennifer," while the Calliope House has been transformed into a women's collective led by the daughter of disgraced diet gurus, Verena Baptist (Robin Weigert).

There really is no better time for this book to be adapted for the small screen. The series will obviously touch on sexual assault, which is perfectly aligned with the current #MeToo and #TimesUp movements happening in Hollywood, but also in society as a whole. Additionally, the show's ability to look at society's obsession with beauty through the lens of a fashion magazine and a woman who doesn't fit what many believe is the typical standard of beauty definitely seems to be a great way to confront a lot of issues. Additionally, the show looks like it'll be hilarious and has an amazing cast.

Starring alongside Nash is Emmy-award winner Julianna Margulies as Plum's boss, Kitty Montgomery; Adam Rothenberg as Dominic; Tamara Tunie as Julia; Will Seefried as Ben; and Ami Sheth as Sana. While Plum battles her feelings about her weight, Kitty faces her issues with aging. And with the other characters' perspecitives, the show gives a look into a number of issues women face and the injustices they often have to overcome, both in the beauty world and when it comes to sexual abuse, assault, and/or harassment.

Additionally, the show was created by Emmy-nominated writer Marti Noxon. Noxon has produced and written for a number of hit TV series like UnREAL, which earned her the Emmy nom, Code Black, Glee, Mad Men, Private Practice, Grey's Anatomy, and more. Thus, Dietland is a show created by and starring incredible women, and it's in great hands.

Ahead of the show's premiere it's already received great reviews from critics. The Los Angeles Times said, "Dietland is the smart, funny and brutally honest missing piece between The Handmaid's Tale and Big Littles Lies, and the progeny of films such as The Devil Wears Prada and Thelma and Louise." The Detroit Free Press has said, "Dietland speaks to every woman who's measured herself against an impossible yardstick, yet the show is daring enough to risk alienating its audience with its revenge fantasy." In other words, Dietland is a must watch.

You can catch Dietland when it premieres on AMC on Monday night, June 4, at 9 p.m. EST. Trust me, you won't want to miss the new show everyone will be talking about.