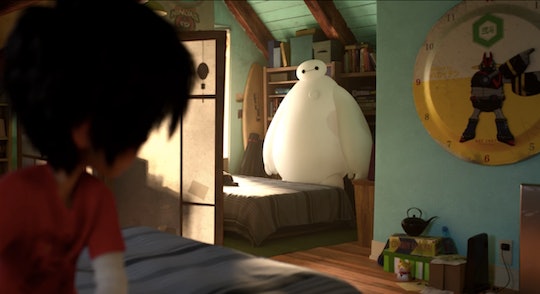 A Baymax Robot For Disney Parks May Be In The Works

Visitors to Disney theme parks have long had the opportunity to interact with actors dressed as Tigger the Tiger and Cinderella, but the entertainment giant may be taking the concept of roaming characters a step further. Disney recently filed a patent to for an interactive, controller-operated robot, and the drawings for the possible upcoming innovation very much resemble a certain superhero from the 2014 film Big Hero 6. It very well could mean that Disney is making a Baymax robot for its parks — or that it intends to do so in the future.

The patent request, filed Thursday, is for the design and control of "humanoid robots" that are "particularly adapted for soft contact and/or interaction with a human." It doesn't specify which character or characters these potential robots would bring to life, but Gizmodo points out that the "round, plush body" depicted in the accompanying sketch very much resembles the Baymax robot. And Disney engineers confirm in the patent that they have already built a "toy-sized" prototype based on a Disney character.

So, does that mean that a giant, huggable Baymax will be roaming the walkways next time you head to Walt Disney World, ready with the high fives? Maybe one day. (Romper has reached out to Disney spokespersons for comment on the report and is awaiting a response.)

According to Gizmodo, applying for a patent does not guarantee that a company will build the project. But if Disney does decide to roll out a robot Baymax (or any other character), park visitors will be reasonably certain of its safety.

"It's hard to know why Disney decides to file for a patent, but they have been looking at soft-body robots since Big Hero," theme park writer Jim Hill told The Orlando Sentinel. "Disney is still terrified that even with this soft technology, a robot could accidentally harm a child. They do a lot of testing."

In the past, Disney has employed free-roaming robots. Push the Talking Trash Can, for example, was essentially a remote-controlled vehicle, the newspaper reported. The new robot, though, would be a little more complicated than that: Different portions of its "body" would fill with water or air in order to appropriately react to events like a child's hug or a collision.

Even the idea of such a robot cements Disney's reputation as "the happiest place on Earth." For now, let's pop some popcorn and queue up Big Hero 6, and dream of the day when we can meet the superhero in person.