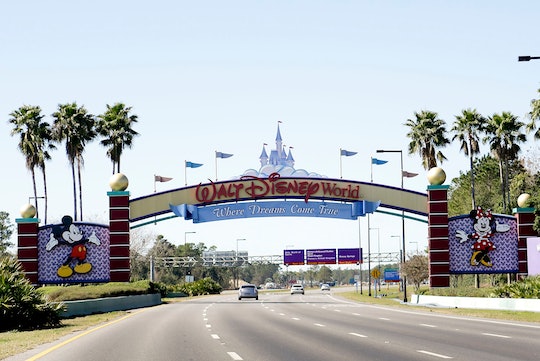 Hurricane Dorian is charging full speed ahead towards Florida's east coast. As a Category 5 storm, several counties throughout the state are already under a mandatory evacuation order. Due to the threat, many might be wondering: Is Disney World closed due to Hurricane Dorian? The storm has definitely affected how the happiest place on earth will run the first week of September, but for now Orange County is not under an evacuation order. However, for the safety of potential visitors, Disney World in Lake Buena Vista, Florida has made significant changes to its schedule.

Visitors who have a scheduled trip planned to Disney World might want to keep a close eye on the park's Facebook page. That's where the park announced it's amended hours for Sept. 3, which reveal that Magic Kingdom and Epcot will be closing at 3pm ET. The closing time marks a half day for both parks, which are usually open until at least 10pm ET on most nights throughout the week. For now the Disney World site states that the parks will be running at normal hours again starting Sept. 4, but that likely depends on how long Hurricane Dorian decides to stick around.

At least two parks throughout Disney World will be closed all day on Sept. 3. A handful of other parks on the property will close an hour later than the two main parks at 3pm ET.

The full list of parks and their updated hours can be found below:

Though all Disney World resorts will remain open throughout the storm, according to the website, the Fort Wilderness Resort & Camping Ground is scheduled to close at 3pm on Sept. 3 and reopen only after the storm has passed.

Unfortunately for guests, the park's After Hours at Animal Kingdom needed to be canceled. Disney World has already offered guests several event options to exchange their pre-paid tickets for to accommodate the inconvenience. They are also offering a refund if none of the options work out for specific guests.

Though it is definitely a bummer that things are being shut down early and/or canceled, safety for all is definitely the priority in this instance.

Several other theme parks within the area are also preparing to bunker down throughout Hurricane Dorian, including SeaWorld and Legoland. The Kennedy Space Center, which is just east of Orlando and closer to the coast, planned to close on Tuesday and Wednesday as the storm made it's way up the coast.

To stay updated on Disney World parks and resorts throughout Hurricane Dorian, keep an eye on the official site's Weather Updates & Information page.

More Like This
Here's Why Wearing Long Sleeves In The Summer Can Be Good For Your Baby
Should You Swaddle Your Baby In The Summer? Here’s How To Dress Them
Best U.S. Summer Travel Destinations For Families
13 Going on 30 Is Just As Sweet & Funny As You Remember — And Kids Will Love It Too