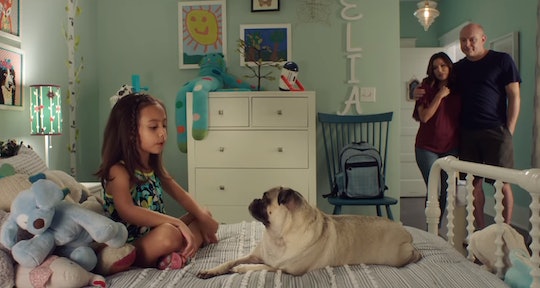 Here we are in those hot, long days of summer — the dog days, as they say — with a movie celebrating their unique magic through the lives of our best little furry friends. It seems like the perfect recipe for a family afternoon, basking in the icy air of the theater with a funny and saccharine film about some of the sweetest characters who say so much without uttering a word. But should you take the whole family to see Dog Days this weekend? Or more specifically, is Dog Days appropriate for kids under 5?

There is a tricky line with movies about animals. It’s hard to know, going in, if it’s going to be a lark like Finding Nemo or a scarring experience like Watership Down. And so many of them are like Bambi and fall somewhere in between, so a lot depends on the maturity and experiences of the child. Dog Days appears to be one of these — a mostly benign, cute tale that shouldn’t be harmful, but that may have some elements that may surprise parents and aren’t appropriate for all kiddos.

That’s reflected in the PG rating, which it earned for rude and suggestive content, and for language, according to IMDb. The story is an ensemble comedy about a large cast of humans whose lives are intertwined by their dogs in ways that make the world a better place. The Atlantic’s review noted that it isn’t a particularly inventive film, nothing happens that the viewer can’t see coming, but that it’s just the kind of lighthearted entertainment that you just want from films about live-action animals. It’s the cinematic equivalent of cat videos and dogs on Twitter; it leaves us feeling just a little better than we expect it possibly could.

Common Sense Media rates it as a movie for ages 12 and up, noting cursing and a scene with pot brownies. There are also dating storylines and some implied adult sex that may or may not fly right over young children’s heads. For some parents those factors will be dealbreakers, while for others they are perfectly normal, so it’s up to parents to decide on those elements.

Perhaps more concerning would be a scene in which a dog passes away, and another storyline involving a widower who loses his beloved dog friend when it runs off, according to Common Sense Media. These themes could be tough on young ones, and we all know how even a traumatic moment in a movie can ruin the entire experience. There certainly are families with young kids who have already successfully navigated the loss of a pet, and for them these scenes might be different. USA Today noted that the movie doesn’t shy away from tough emotions during these moments but realistically depicts the rewards of pet ownership alongside the heartache.

That being said, the film seems to excel at actually celebrating dogs in a funny and realistic way, rather than resorting to gimmicks like talking animals, according to Roger Ebert’s review site. It tackles some big topics, like a closed-off new adopted child, first-time parents, and navigating a breakup, and shows how animals walk alongside their owners and reflect the good and bad in their lives.

The filmmakers have assembled an impressive cast — no doubt owing in part to their canine co-stars — including Vanessa Hudgens, Nina Dobrev, Eva Longoria, Rod Corddrey, Tig Notaro, Ron Cephas Jones, and Finn Wolfhard. Pulling them together into what sounds like a benign enough day at the movies. But if you have small children, there may be just enough element here that earn this a spot on the back burner for a few years until everyone can enjoy it that much more.