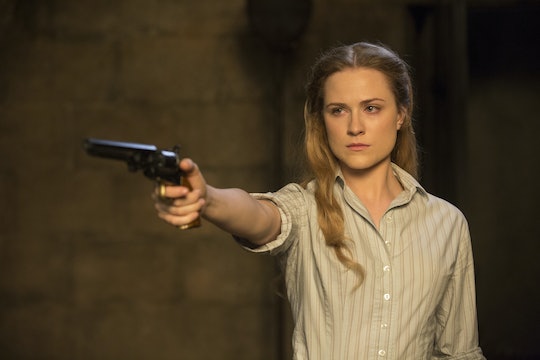 Is Dolores Working With Arnold On 'Westworld'? Episode 5 Hints That She May Be

Dolores is making big moves on Westworld. When we first met her only five episodes ago, in the series premiere, she was an innocent farmer's daughter trapped in a horrifying life of repeated sexual assault and memory wipes. Of course, being a robot, Dolores was meant to forgot the atrocities committed on her – but that's not exactly working, anymore. Dolores is gaining more and more agency with each passing episode, culminating in an epic turn of events on tonight's "Contrapasso." But what sparked the former farm girl's transformation? Is Westworld's Dolores working with Arnold?

Throughout the past several episodes, Dolores has been seemingly haunted by a mysterious, disembodied voice urging her to do things – to "remember" and to kill the outlaw who attacked her and slaughtered her family. Urged on by the voice, Dolores even managed to dig up a random gun outside of her farm. That discovery kicked off what was probably the biggest robot development to date. Dolores was able to override her weapons permissions, allowing her to fire off the gun – something she was specifically programmed not to be able to do.

The voice in Dolores' head doesn't appear to belong to her alone. Though she's yet to put a name to the obviously-male voice herself, it is, in all likelihood, Arnold –Ford's former partner in Westworld. Two other malfunctioning hosts – the robot who previously played her father, Peter Abernathy, and the criminal Walter – heard voices as well. In a clip caught on tape by Elsie and showed to Bernard, Walter was even heard speaking aloud to the unseen voice, calling it "Arnold."

Episode 5 delved even further into the possibility that Dolores might be in league – against her will or voluntarily – with Arnold. At some point, William (who seemed extraordinarily creeped out by Dolores' spacey behavior) asked whether she had been talking to someone – which she denied. Later, an analysis session with Ford uncovered a very startling piece of information – the supposedly long-dead Arnold had conscripted Dolores to help him destroy Westworld over three decades earlier. Ford even seemed to be suspicious that Dolores may have had contact with the maybe-or-maybe-not dead Arnold in the time since his death, though Dolores denied that.

Spookily, Dolores once again addressed her unseen voice once Ford left the room, telling it that "he [Ford] doesn't know" and that she "didn't tell him anything." Given that Ford and Dolores had just been talking about Arnold, with Ford quizzing her about the last time she'd spoken to him, it's not too much of a stretch to guess that Arnold is the voice in Dolores' head.

One other big question remains – how complicit is Dolores in whatever it is probably-Arnold is trying to do?

Though Dolores seemed to be purposely keeping a secret from Ford in her scenes with him, in her scenes with William and Lawrence ("El Liso"), Dolores had a series of visions that seemed to only freak her out. She followed her own doppelgänger through the orgy house, then having a hallucination of herself "unravelling." It appeared as though the voice in her head was trying to lead her somewhere – Dolores kept encountering the same maze imagery that the Man in Black had been tracking down. In her last appearance in tonight's episode, she even glanced down at the maze printed on the coffins carrying the nitroglycerin-soaked bodies and said aloud that she was "coming."

Whether she's fully aware of it or not, Dolores is being led on a journey – and the journey seems to be taking her straight to Arnold, or whoever the voice in her head might turn out to be.