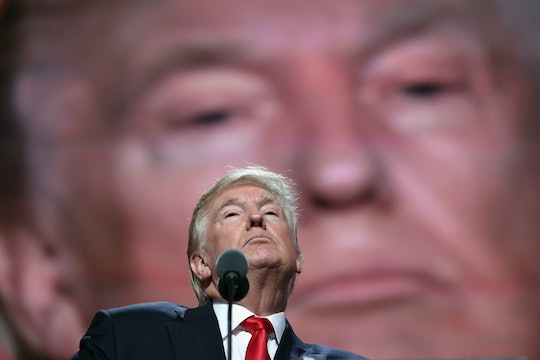 In an apparent attempt to steal the spotlight from the Democratic National Convention, Republican presidential nominee Donald Trump held a press conference in Florida on Wednesday morning, addressing, among other things, the accusation that Russia was responsible for the Democratic National Committee hack that exposed 20,000 emails. After denying that the hack was a Russian-sponsored ploy to ensure Trump's victory, the candidate actually invited Russian to hack his opponent. But is Trump asking Russia to hack Hillary's emails treason, in the legal sense?

According to Cornell University Law School, the law states that "Whoever, owing allegiance to the United States, levies war against them or adheres to their enemies, giving them aid and comfort within the United States or elsewhere, is guilty of treason." So, maybe? He didn't exactly declare war, but he did ask a foreign government to illegally access classified documents, which could possibly be construed as adhering to the enemy. The full quote: "Russia, if you're listening, I hope you're able to find the 30,000 emails that are missing, I think you will probably be rewarded mightily by our press." Make no mistake, Russia is listening. If they decide to take Trump up on his offer, could he be held responsible?

The 30,000 number refers to emails that were deleted from Clinton's server during her tenure as Secretary of State. Following the press conference, according to CNBC, Trump campaign Senior Communications Advisor Jason Miller claimed that Trump wasn't asking Russia to hack Clinton, but merely asking anyone who might already be in possession of the emails to turn them over. Jake Sullivan issued a statement on behalf of the Clinton campaign: "This has to be the first time that a major presidential candidate has actively encouraged a foreign power to conduct espionage against his political opponent."

Incredibly, this isn't even the first time that Trump's been accused of committing a serious crime while on the campaign trail. In March, North Carolina's Cumberland County Sheriff's Office investigated the possibility of charging Trump with inciting a riot after his supporter, John McGraw, assaulted protester Rakeem Jones during a Fayetteville rally. The office later concluded that there wasn't enough evidence to support a conviction, according to CNN. But Trump is no stranger to legal trouble; in June, USA Today uncovered that he's been involved in over 3,500 legal actions, including 1,300 in which he was named as the defendant. He's currently due to stand trial in a class-action suit against his get-rich-quick scheme, Trump University, on November 28, three weeks after the presidential election. What's one more suit?