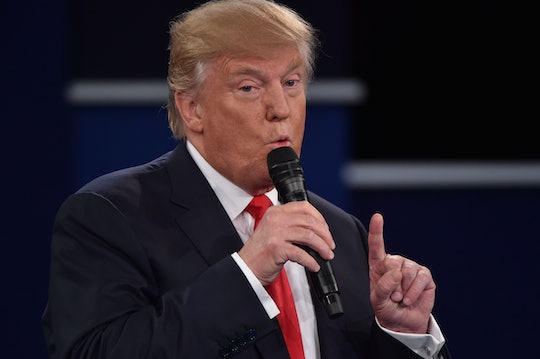 Is Donald Trump Getting A TV Network? Sources Claim It's A Possibility

Perhaps you think that, if Donald Trump loses the election, he will spend the rest of his days hiding out at Mar-a-Lago and eating old Trump steaks, while you slowly convince yourself that his candidacy was just a very long, very detailed nightmare. You fool! Trump's not going anywhere. In fact, Donald Trump may be getting a TV network of his own, at least if his son-in-law has anything to say about it.

According to The Financial Times, Jared Kushner, otherwise known as golden child Ivanka Trump's husband, has reached out to Aryeh Bourkoff, the head of LionTree, a boutique investment bank that is widely influential in the media world, about the possibility of his father-in-law setting up a television network to capitalize on all his recent national attention. After all, according to Trump, the campaign will have been the biggest "waste of time" in his life if he loses to Hillary Clinton, a scenario that seems increasingly likely as more allegations of his improper sexual conduct come to light. It makes sense that he might want to use the whole "running for president" thing to set up a Fox News-style network and stay on your TV screen forever, especially now that those responsible for The Apprentice, his most notable prior foray into the small screen, have publicly denounced him, so there's probably no going back to that.

Still, despite Kushner's interest, the Trump TV plan is far from a done deal. The sources who reported the Kushner/Bourkoff meeting also reported that talks had not progressed since. (Romper reached out to Kushner for comment, but did not immediately hear back.) Setting up a television network would require an immense amount of money and commitment. And The New York Times reports that Trump himself is not the most enthusiastic fan of the idea.

After all, as The New Yorker points out, Trump has gotten plenty of media attention for free. And if he can keep calling into Fox News whenever he feels like it and tweeting out his every thought to millions, why would he want to go through the hassle of setting up a whole TV network? Plus, he's got a cautionary tale in Sarah Palin, the former vice presidential candidate and governor of Alaska, who set up "The Sarah Palin Channel" and had to cancel it after only one year due to low interest.

Still, with Donald Trump, you never know. After all, he does have a lot of opinions about TV. Just ask the people at the "boring and unfunny" Saturday Night Live.