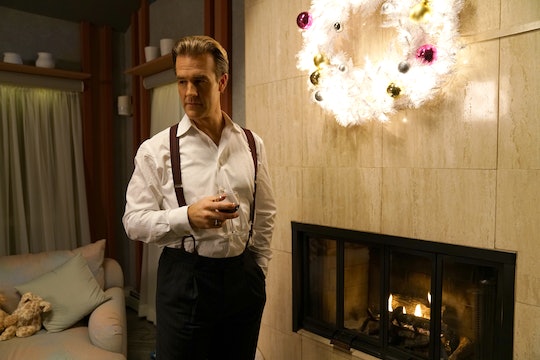 On FX's Pose, Evan Peters plays Stan Bowes, a businessman looking to take advantage of all the materialistic excess the 1980s has to offer. In an effort to make that happen, Stan started a new job at Trump Tower in the very first episode. There are numerous references to Trump in the show considering it's Stan's place of work, but is Donald Trump going to be on Pose? Even if the man himself doesn't make an appearance, an actor could step in to portray a younger Trump, since the show is set in 1987.

But it doesn't seem like Trump will be showing up on Pose in any capacity, according to series co-creator Ryan Murphy. That wasn't always the case, though. In the original script penned by Steven Canals, Trump had no presence in the series, but that changed throughout the show's development. Trump was added in as an actual character, to be played by James Van Der Beek (who now plays Stan's boss Matt Bromley), intended to be a representative of a certain aspect of the decade that focused heavily on money and position. But after the 2016 election, Murphy no longer wanted Trump to be a character on the show; instead, he was replaced with Matt and relegated to mentions in the dialogue.

Murphy explained the changes to Entertainment Weekly, stating that Van Der Beek was "written to be a young Trump" but then he quickly became too distracting. As Murphy said:

The election happened, and we're like, 'Nobody wants to see him.' And then it was going to be an actor impersonating somebody who's already a caricature, and I thought, 'Well, that’s just going to take you right out of the show.'

However, Murphy and his team still felt that Trump provided a necessary contrast to the other characters and emphasized certain themes of the series, particularly those relating to authenticity. Murphy told The New York Times that the show was set in "the Reagan era, the Trump era in New York City, when you could pretend to be money and be seen as wealthy. You could pretend to be anything and be accepted, whereas before that, you really had to have the background and education and breeding."

That concept is important to Stan's character, a New Jersey native who landed a position he previously wouldn't have been able to because his education and background wasn't on the same as the other people vying for it. But co-creator Brad Falchuk felt the references to Trump also tied into the the show's title. He told Entertainment Weekly:

The show itself is also, in some ways, a response to the current political landscape. Murphy spoke to Variety about that, saying, "Our community is under such attack from this administration. I wanted to put something optimistic and uplifting out there."

Trump won't be joining the supporting cast of Pose any time soon, whether played by an actor or not. However, the limited allusions to him do serve a specific purpose: they make it clear what the status quo was like at the time, what kind of world the characters were living in, and how they conformed to expectations — or defied them.