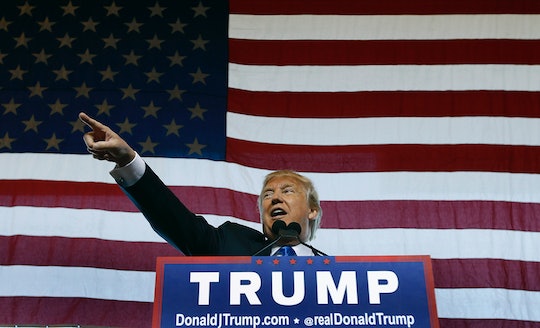 Is Donald Trump Watching The ABC Democratic Debate? He's Been Pretty Busy Lately, But The Don Won't Miss This

Saturday night, on the heels of Tuesday's Republican debate, presidential candidates Sen. Bernie Sanders, former Secretary of State Hillary Clinton, and Maryland Gov. Martin O'Malley (yes, folks — he's still in this thing) will take to the stage in a Democratic debate hosted by ABC. It should be an interesting watch, especially given the flurry of news surrounding Sanders campaign illegally accessing Clinton campaign data, Sanders' subsequent lawsuit against the Democratic National Committee, and the DNC restoring access back to Sanders campaign all within the just 48 hours. But here's the bigger question: will talking toupee Donald Trump tune into the Democratic debate?

I dunno folks, the Trump has been pretty busy lately. According to Trump's Twitter account, he's still basking in the glow of post-debate polling from Reuters that came out yesterday — wait, did I say basking? Because I meant bragging — that puts Trump with a 19-point lead above fellow GOP frontrunner Sen. Ted Cruz with a whopping 28 percent support. Seriously folks ... how is the former host of The Apprentice the numero uno GOP choice right now?!

When Trump isn't busy flaunting poll results, he's continuing to take vicious jabs at former Florida Gov. Jeb Bush. And I do mean vicious — Trump has had no hesitation tweeting whatever is on his mind, but his latest tweets about Bush are particularly harsh:

When he's not too busy completely slamming Bush on Twitter, Trump takes a few thoughtful minutes to spend some quality family time with his granddaughter, Chloe Sophia, as his son Donald Trump Jr. shared on Twitter Friday:

Right ... so, back to the matter at hand. Will Trump watch tonight's Democratic debate? It wouldn't be the first time: Trump live-tweeted October's Democratic debate, but only made a few comments on Twitter following last month's Democratic debate that took place just one day after the Paris attacks. While we don't know for sure if he'll be tuning in, a tweet from earlier Saturday reveals that he knows how critical tonight's debate will be for the Sanders campaign, while simultaneously criticizing Clinton:

It's pretty safe to say that The Don will tune into tonight's festivities in some way, shape, or form, given how vocal he's been in the past and how important tonight will be for Sanders and Clinton. (Sorry, O'Malley, who r u again?) With VoterGate on everyone's minds, it'll be interesting to see whether The Don takes Sanders' side to insult Hillary, or whether or not he'll jump at the chance to take Sanders to task. If I'm honest, I bet he'll try both — he is, after all, Donald Trump.

More Like This
Marie Kondo Gives Up Tidying Post-Kids, Sparking Joy For Moms Everywhere
Does The FDA's Plan To Limit Lead In Baby Food Go Far Enough?
10 Great Podcasts That Will Keep Your Kids Entertained On Your Next Family Road Trip
Sally Field Is The Ultimate Cool Mom Who Once Tried To Set Her Son Up With An Olympian
What Parents Are Talking About — Delivered Straight To Your Inbox