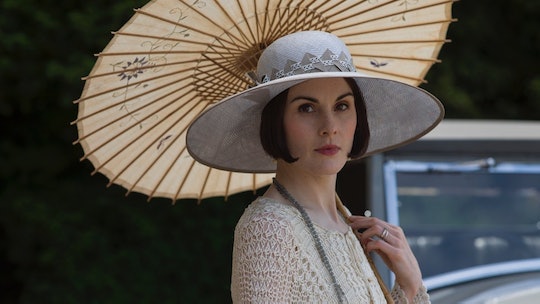 With Downton Abbey arriving in theaters for its very first cinematic outing this year, fans old and new might find themselves wanting to revisit the series that spawned the movie. The show, which premiered in 2010, ran for six seasons in the U.K. and the States, earning a dedicated audience in the process. It is currently available to stream, but unfortunately Downton Abbey is not on Netflix. It's on Amazon Prime.

All six season are available to watch for free for Prime members, so if you already have an account, then you're good to go. You can revisit every classic moment, from that time Lady Mary (Michelle Dockery) covered up someone's death to the day she lopped off her hair in a charming bob. If you don't have access to Prime, a free trial is always a possibility; failing that, episodes of the show can be purchased on YouTube, iTunes, Vudu, and Google Play. Neither Netflix nor Hulu have any of the episodes.

There is one more option. Fans can watch the entire series on the PBS website with PBS Passport. To become a member, one must sign up on Thirteen's website and make a monthly donation of your choosing; you could donate $5 or $50, depending on what you're able to give. You can also donate once and have access for a month if a continuous option doesn't suit your needs.

With years and years of history leading up to the new Downton Abbey movie, becoming familiar with the characters and their stories on the show might be a necessity for new viewers. While you probably don't have to know every facet of the series before heading to theaters, it could help to enrich the experience and fill in the blanks. Quite a lot changed on Downton over the years as the characters dealt with loss and struggled to understand their place in the world. The show was a soap opera at its heart, which means it managed to fit an impressive amount of drama into its six seasons.

But loss was a recurring theme on the show. Its very first episode began with the sinking of the Titanic and the death of a Crawley cousin whom Lady Mary was expected to marry. Since the manor could only pass to a male heir, Mary had to find someone else to wed right quick — and ended up falling for her distant cousin Matthew Crawley (Dan Stevens). After, of course, they had numerous fights, he went off to war, he found a new fiancée, and said fiancée died of the Spanish flu. Then in Season 3, Matthew himself met his demise in an accident, right after the birth of his and Mary's son.

And that's only a tenth of what's happened on the show. There were several more major characters deaths, on top of health scares and wartime PTSD, as well as more typical soapy storylines like bad marriages, broken engagements, and illegitimate children. Not all of that will play into the Downton Abbey movie (it couldn't possibly all fit) but it's the foundation upon which the story was built. Luckily, streaming Downton Abbey shouldn't be too difficult at all.