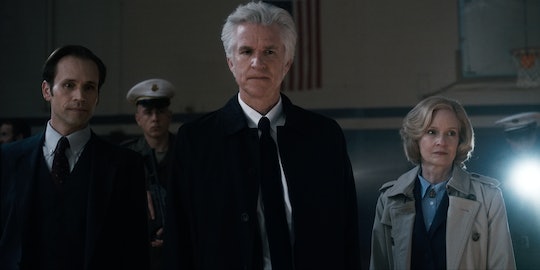 At the end of Season 1, Stranger Things fans saw Dr. Martin Brenner be attacked by the Demogorgon, but that was the last they saw of him. Fan assumed this to mean he was dead, but could it be possible that Dr. Brenner is still alive on Stranger Things? For now, his fate still remains somewhat unclear. Warning: spoilers ahead for Episode 7!

Dr. Brenner, also known as "Papa" to Eleven, was definitely the primary villain of Season 1. The Demogorgon wouldn't have even made it into this world if he hadn't pushed Eleven to use her powers the way he did. Therefore, when he was attacked by the Demogorgon, most people rejoiced and found it fittingly ironic. Finally, the villain got what was coming to him. Except, did he really? The scene cut before there could be any real confirmation that he was dead, which has led to plenty of theories about Dr. Brenner's true fate. Additionally, the show creators, the Duffer Brothers, basically confirmed last year that it wasn't the last fans would see of Dr. Brenner.

"I would say that if we were going to kill Brenner...as an audience member watching the show, if that was his death, that would be very unsatisfying to me — when the monster jumps on him and we cut away," Matt Duffer told ScreenRant. "He would deserve much more than that as an ending. So yes, there's a possibility of seeing him again."

That possibility was confirmed in Episode 7 of Stranger Things Season 2, though not in the way fans may have expected. Eleven found another girl who was experimented on by Hawkins National Laboratory. Her name is Kali and she has the ability to make people see things that aren't actually there. Eleven agreed to work with her to find those people who hurt them. Shortly thereafter, they attacked a man, who then claimed he knew where Dr. Brenner was. Eleven insisted "Papa" was dead, but the man said that wasn't true and he was the only one who knew where Dr. Brenner was. Perhaps the man was only trying to save his own life, but it's equally possible he was actually telling the truth.

While this Dr. Brenner was obviously only a product of Kali's abilities, that doesn't mean he isn't actually alive out there somewhere. Obviously he's not at Hawkins Lab anymore, but he could be anywhere. Still, despite Kali's methods of suggestion, it wasn't enough to make Eleven stay. Instead, she headed back to Hawkins to help her friends.

Even so, I doubt this is the last we'll hear of Dr. Brenner. In fact, it's probably just the beginning. Because while Eleven may be there to help her friends now, the idea that Dr. Brenner could still be out there will always be in the back of her mind. Knowing that Dr. Brenner is out there and could find her again someday will be a fear Eleven will always have until she faces it head on. Hopefully, if and when the time comes, she's be able to face him and gain some closure on everything he did to her once and for all.