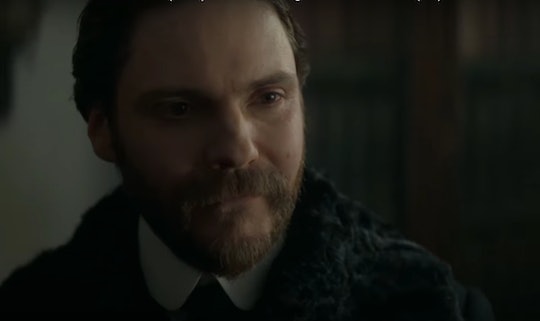 Dr. Laszlo Kreizler Is Determined To Solve A Mystery On 'The Alienist'

The star of TNT's new period crime thriller The Alienist is undoubtedly Dr. Laszlo Kreizler, the brilliant psychiatrist determined to solve the mystery of the serial killer targeting boy prostitutes in Gilded Age New York City. So obviously I want to know is Dr. Laszlo Kreizler from The Alienist based on a real person? Of course psychiatrists and serial killers existed during this time, though by different names, but how true to history is this particular maverick doctor?

The Alienist is based on a bestselling book of the same name by author Caleb Carr. Though Carr is a respected historian (particularly a military historian) the book is not based on historical fact. And Laszlo, the story's main character played by Daniel Brühl, is not based on any particular historical figure. He is, instead, a fictional man who gets his origins from the real psychiatrists of the time, who were then called "alienists." What makes Lazslo unique, however, is his determination to use his own expertise as a psychiatrist to find the killer, at a time when trying to understand a psychopath's mind was considered distasteful at best.

Not unlike the show Mindhunter, about the real FBI agents who actually coined the phrase "serial killer," The Alienist takes a cerebral approach to detective work, even though this work might be misunderstood by the establishment. And yes, Lazslo may share definite similarities to John Douglas, upon whom Holden Ford (the main character of Mindhunter) is based. However, he is not intended to specifically be Douglas himself.

Though Laszlo is pure invention, some of the characters, places, and situations are definitely historically accurate. The characters interact closely with a young Theodore Roosevelt, who was the police commissioner of New York City when the story is set in 1896. Dakota Fanning's character Sarah Howard is likely based on Isabella Goodwin, a real historical figure who became New York's first female detective. Brühl's Laszlo, however, has no clear historical basis. That doesn't make him any less interesting, however.

Sauntering around the moody, atmospheric streets of 19th century New York City with his harsh Irish accent and piercing stare, it's hard to look away from Brühl's Laszlo Kreizler. In a promotional video for the show, Brühl is direct when he talks about his character. "Kreizler's a very manipulative person," he says. "He can be very cocky and very arrogant." But Brühl also has some sympathy for the man, explaining that at the time, "many people saw alienists as devils," and saying that because Laszlo has had so much pain in his own life, "you understand why I'm so obsessed with finding the killer."

In another extra clip, Brühl explains that his character has the ability to put himself into the mind of the killer (a trait that Laszlo shares with the real life Douglas), and that this mindset doesn't make him very popular. It does, however, make him an effective detective. Or, to be more precise, an effective criminal psychologist. Other characters whose methods were frowned upon at the time were the Isaacson brothers, a pair of Jewish scientists intent on using newfangled forensic techniques to examine the crime scenes. At the time this was seen as nothing short of ghoulish.

So while the particulars of the story and the literal characters are not exactly true to real life, the setting and the world the story is set in very much is. Taking place just a few years after Jack the Ripper killed his last victim, these kinds of crimes were visible in public life, though polite society surely did not discuss them openly. Though the crimes and the investigation are fascinating for this show, what's really drawing me in is the intricately beautiful world of 19th century New York, as well as the beautiful performances by the actors.

Editor’s Note: This article has been updated from its original version to correct a factual error regarding Isabella Goodwin, the first female detective in New York.