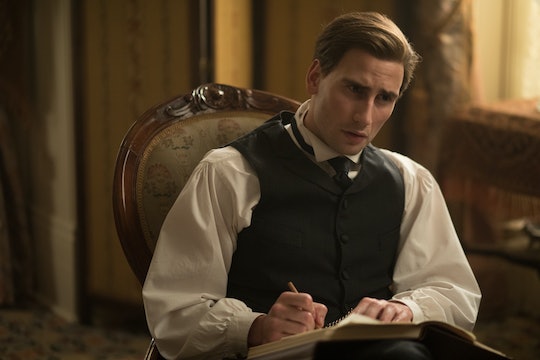 Dr. Simon Jordan Is A Pivotal Part Of 'Alias Grace'

Netflix's new Margaret Atwood adaptation has roots in real life events, but how much of it is fiction and how much is real life? For example, you may be wondering, like me, is Dr. Simon Jordan from Alias Grace a real person? Whether real or not, the good doctor plays an important role in the story, as it is his conversations with convicted murderer Grace Marks that draws out the actual narrative.

Alias Grace is a six-part series based on the book of the same title by Margaret Atwood. The events of the novel are based on the real life character of Grace Marks, a 16-year-old Irish housemaid in the mid 19th century who was convicted of the murder of her employer Thomas Kinnear and his mistress, the housekeeper. She was accused along with her coworker, James McDermott, who was hanged for the crime. However, mercy was granted to Grace due to her age and her sex. She was sentenced to life in prison and so spent the following 30 years in prisons and asylums. Though convicted, discrepancies in accounts mean that it has never been totally clear whether Grace was completely guilty, or somehow duped into playing a part in the horrific murders.

In the novel, 15 years into her prison sentence, Grace is taken to be studied by a doctor, Dr. Simon Jordan. This doctor is supposed to determine her mental state — and thereby whether she can fully be held responsible for what happened or not. But while Grace Marks actually existed in real life, Dr. Simon Jordan is a complete invention of Atwood's design. Though he is not a real person, this character provides the lens through which the audience can get a glimpse of Grace's personality, her private life, and her truth.

A review of the novel in The New York Times by Francine Prose describes Dr. Jordan thus: "Who better to tackle this puzzle than Simon Jordan, a well-meaning young doctor from Massachusetts employed by a committee of pious do-gooders petitioning the Canadian Government to pardon the unfortunate and (after 15 years in prisons and asylums) possibly rehabilitated Grace?" In the novel, Simon hopes to open his own asylum, and is interested to see if he can get Grace to open up and remember the murder, which she claims to have completely forgotten.

In the series, Simon Jordan is played by Edward Holcroft, an English actor known for the Kingsmen movies as well as a few other period dramas like Lady Chatterly's Lover. While Grace is indisputably the main character in Alias Grace, Simon Jordan is the closest thing to another lead role. The book is told mostly through Grace's perspective, but sometimes through Simon's as he observes her from the outside. And it seems there's quite a bit to observe.

Eight and a half years into her sentence, Grace began exhibiting signs of insanity, including suffering from visions and sudden, random changes in mood. According to Kathleen Kendall in "Beyond Grace: Criminal Lunatic Women in Victorian Canada," she was sent to an insane asylum for 16 months during this period and then sent back to the penitentiary. She was among the first women to be called Criminal Lunatic Women in Canada.

So she may not have been examined by someone named Simon Jordan, but someone certainly studied her. And someone eventually signed off on her release 30 years later, but it is unclear why. Whatever the real story is will probably never be fully known.