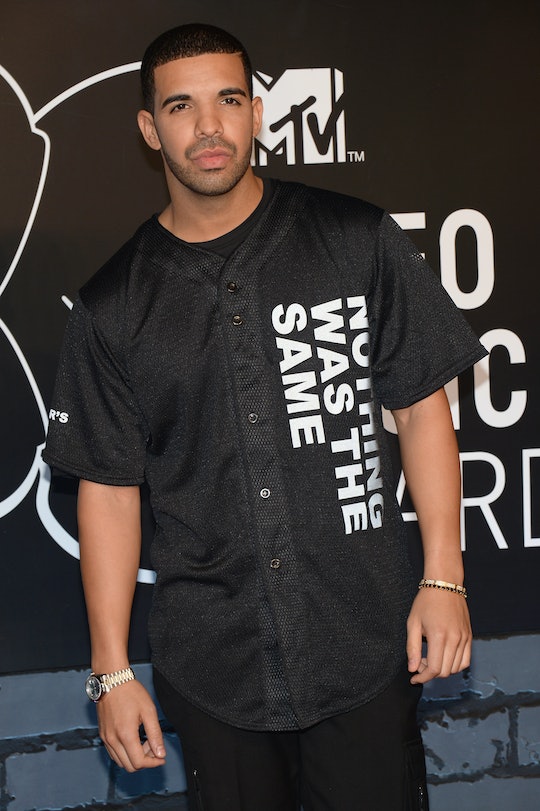 Is Drake At The VMAs? The Reason He's Late Is Hilarious

Drake is nominated for five 2016 MTV VMAs, but the moonman for Best Hip-Hop Video was the very first award handed out that night, and Drake missed it, leaving Puffy to collect it on his behalf. So is Drake at the VMAs? Well, he's technically on his way, but the poor guy got stuck in traffic.

So Drake is running late, but he's definitely on his way. Luckily, he has a few more chances to collect a VMA on stage. Puffy's holding onto his Best Hip-Hop Video Award for "Hotline Bling," but the track has three other nominations tonight: Best Art Direction, Best Male Video, and Video of the Year. He's already lost Best Male Video to Calvin Harris's "This Is What You Came For." "One Dance" was also nominated for Song of the Summer, but it lost out to Fifth Harmony's "All In My Head (Flex)" during the pre-show.

Video of the Year is the biggest award of the night (Michael Jackson Video Vanguard Award notwithstanding) and it gets handed out at the very end of the show. So Drizzy has plenty of time to get from wherever he is (hopefully not Canada) to Madison Square Garden in midtown Manhattan if he winds up winning the big one. (May I suggest hopping out of your Uber and taking the subway? It'll be so fast, dude. The West Side Highway is probably a mess right now.) He's got some stiff competition in the Video of the Year category, though, going up against Beyoncé's "Formation," Adele's "Hello," Justin Bieber's "Sorry," and Kanye West's "Famous."

Plus, would Drake really leave Rihanna hanging after dedicating this beautiful billboard in Los Angeles to her in honor of her winning this year's Video Vanguard Award?

"Congratulations to Rihanna from Drake and Everyone at Ovo," the sign read, which Rihanna posted to her Instagram with the caption, "When he extra." And since the Video Vanguard Award recipient usually gets a heartfelt intro speech from a close friend presenting them with the award (Jimmy Fallon presented Justin Timberlake with his in 2013, Jay Z presented Beyoncé's in 2014, and — awkwardly enough — Taylor Swift presented Kanye's in 2015), it's entirely possible that Drake will be Rihanna's presenter. He's been one of her closest collaborators and greatest champions for years.

Wherever you are, Drake, we hope you don't let your friend Rihanna down. Someone will keep accepting your awards in the meantime.