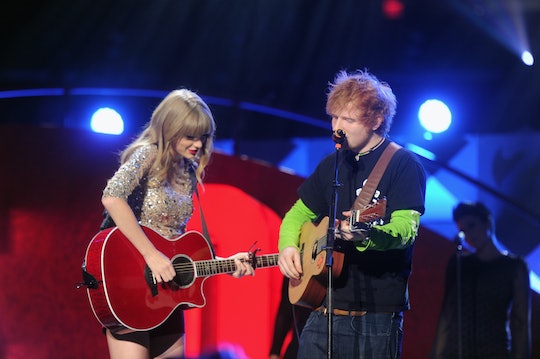 Taylor Swift's New Song "Dress" *May* Be About Ed Sheeran & OMG, What?!

My friends, it's here. I'm talking, of course, about Reputation, and all of the things we can maybe learn about Taylor Swift's love life and celebrity feuds from the lyrics. Which leads me to a pretty scandalous theory making the rounds. Is "Dress" actually about Ed Sheeran? Taylor Swift's new album does reference a lot of her famous friends and I'm here to take a closer look. The jam is one of the sexier tracks off of New Taylor's album, and if it really does happen to be about Ed Sheeran I may actually die. The evidence, as first reported by BuzzFeed, is pretty compelling.

Swift is known for her Dear Diary style of songwriting, with a lot of cheeky mentions about her crushes, ex-boyfriends, and current paramours. For this reason, scanning a new Swift album for references to her public relationships is something of a national sport. Sure, most of the love songs on Reputation are clear references to Swift's rumored current boyfriend, the adorably English actor Joe Alwyn.

However, could there be a scandal lurking in the depths of these otherwise perfectly gushy lyrics? To be honest with you, I really, really want this to be true. This would be the biggest Swift romance theory since that time she dated a Kennedy. Let's take it line by incriminating line.

This is the first verse:

Our secret moments in your crowded room/ They've got no idea about me and you/ There is an indentation in the shape of you/ Made your mark on me, a golden tattoo

So, I mean. You guys see that, right? They're having secret moments? We have no idea about the two of them? Oh yeah, and that line "in the shape of you." That sounds a lot like a certain Ed Sheeran song that was playing everywhere all the time for a solid year. She also states that this mystery man made his mark on her like a golden tattoo. The only person I can think of in the world who would have a golden tattoo is Ed Sheeran. You know who doesn't have any tattoos (that I know of)? Joe Alwyn. Just saying.

OK on to the next piece of evidence:

All of this silence and patience, pining and desperately waiting/ My hands are shaking from holding back from all this

Look, Swift and Sheeran have been BFFs for years. And everybody knows that BFFs who both happen to be attractive, massively famous and successful heterosexual pop stars are generally bound to fall in love. I can only imagine all the pining that has been going on.

Carve your name into my bedpost'/ Cause I don't want you like a best friend/Only bought this dress so you could take it off/ Take it off (ha, ha, ha, ha)

What's that Taylor? You don't want him like a best friend? You guys remember who Swift's best friend is, right? No, not Karlie Kloss. It's Ed Sheeran. Is anyone else feeling like it's getting kinda hot in here?

Yeah, everyone did think they knew Swift and Sheeran. Just two totally platonic song-writing buddies who seem to know a whole lot about heartbreak. Also, you know who gets drunk? Ed Sheeran.

I think I've gathered enough evidence here to present a pretty convincing argument wouldn't you say? Of course, I do have one other theory. That is that Swift is intentionally putting all of these little clues in her songs in order to deliberately mess with us. I wouldn't put it past her and honestly, I would respect the hell out of that. But I still really want this to be true.