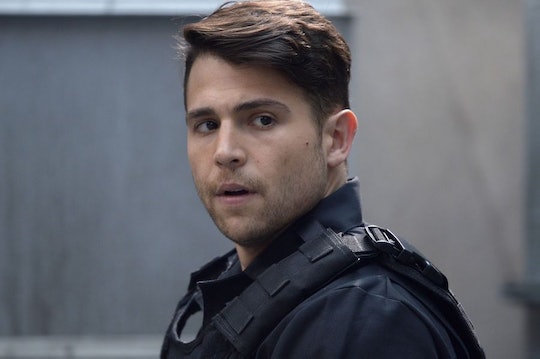 Is Drew Perales The Terrorist On 'Quantico'? He's Probably Not The Bad Guy

There are about a million suspects in the mystery of who is the second terrorist is on Quantico. It's not that crazy to suspect just about every single person that has to do with this show, but the most recent suspect was Drew, the chip-on-his-shoulder NAT who left Quantico a little early. So, is Drew Perales the terrorist on Quantico? While the clues certainly are stacking up against the ex-football player, there's actually a lot of evidence that hints that he's just another pawn in the real terrorist's game.

We finally learned who the voice was on Quantico after many episodes of trying to decipher what our ears were hearing. I, personally, thought I heard every single person clear as day, so when we learned that it was everyone's voices intertwined together, that made sense. But, when Drew's voice prevailed and turned out to be The Voice behind the demands, everyone was wondering just how he was involved.

It's not that surprising that Drew would be involved. He had a chip on his shoulder after things went awry in Chicago and his fiancée was murdered in cold blood. He also had disgraced his name by turning on the football league, exposing a scandal. Basically, Drew had been through a lot and had been consistently blamed for trying to do the right thing. It's not that crazy to think that he had had enough and was ready to take back the control. But does that mean he was willing to kill innocent people?

Well, we learned on Sunday that Drew seemed to be just another pawn in this huge game. He and Simon were held captive by The Voice/terrorist, which makes it seem like he was just as innocent as everyone else. Unfortunately, he was in a building at the time of an explosion, which seemed to seal his fate. Or so it seemed. I don't know if we can believe anyone is actually dead on this show until we see their body. But, immediately after the explosion took place, there was a lot of question whether Drew was alive or dead.

If Drew died in the explosion, then that's just another person the terrorist has taken from the Quantico class. If he's not dead — but faux dead — I think it would be worth suspecting just about everyone else we think is dead. Is Natalie alive, too? She died by explosion, although we never actually saw her die. (Please note that I don't think anyone actually wants to see people die by explosive on a normal Sunday night.)