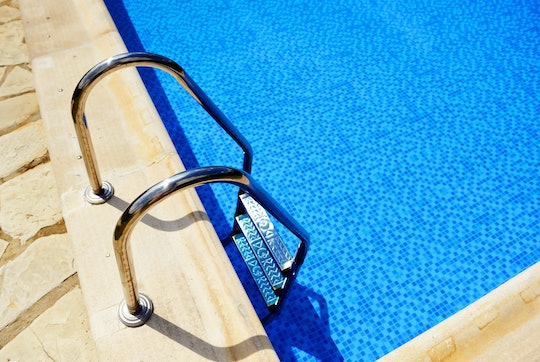 Parents Need To Know The Signs Of Secondary Drowning, Because It's Rare But Real

A few years ago, a video made the rounds on Facebook and other social media about a child who had drowned well after his time in the pool. While I wasn't a parent at the time, I remember learning about dry drowning and becoming terrified of another danger that could seemingly sneak up out of nowhere. Now that I'm a parent, I've found myself wondering, is dry drowning common? Because it sounds terrifying.

Thankfully, dry drowning is extremely rare and the particulars around it are often misleading. Together with secondary drowning, another kind of respiratory distress that can happen after a near-drowning event, "They make up only 1%-2% of all drownings," pediatrician James Orlowski, MD, of Florida Hospital Tampa, told WebMd.

Dry drowning is when "the water triggers a spasm in the airway, causing it to close up and impact breathing," according to Dr. Mark Mitchell, an osteopathic​ emergency medicine physician from Chicago who spoke with the American Osteopathic Assocation about the topic. WebMd elaborated, explaining, "With so-called dry drowning, water never reaches the lungs. Instead, breathing in water causes your child's vocal cords to spasm and close up. That shuts off his airways, making it hard to breathe." While this would be terrifying to witness, it does happen right away after your child inhales water and you would notice the signs of respiratory distress right away.

The first indication that your child might be suffering from dry drowning is that they had to be pulled from the water or had a near-drowning incident, according to Parents Magazine. Kathleen Berchelmann, M.D., a pediatrician at St. Louis Children's Hospital and Washington University School of Medicine, explained to the magazine that "Any child pulled from the pool needs medical attention," in order to assess whether there is any danger to their airway from water they inhaled.

Other indications that you need to seek medical attention for your child is that they are having trouble breathing, are working harder to breathe, or have a persistent cough after an episode in which they inhaled water, according to Parents, and additional signs include sleepiness, forgetfulness or changes in behavior, or throwing up. Science Daily boiled it down following an article in Emergency Medicine News about the topic, recommending that you should seek care "if symptoms seem any worse than the experience of a drink going down the wrong pipe at the dinner table or severe coughing that does not resolve in minutes."

Secondary drowning can be just as serious and the symptoms are very similar. If, after an incident where your child inhales water, you experience those same symptoms increasingly over time afterward, you might have a pulmonary edema. Familydoctor.org explained, "The underlying cause of secondary drowning is pulmonary edema," where "water irritates the lungs and makes it hard to breathe." When you take a breath, instead of filling your lungs with air, they're filling with fluid and preventing oxygen from getting to your lungs and heart. These symptoms can happen hours or days after your child inhales water, but it isn't likely to happen out of the blue.

Just like dry drowning, if your child sucks in a bunch of water or has to be pulled from the pool, you need to watch out for these symptoms and have them evaluated by a doctor. While both dry drowning and secondary drowning are rare, they can be fatal and you should be aware of the signs.