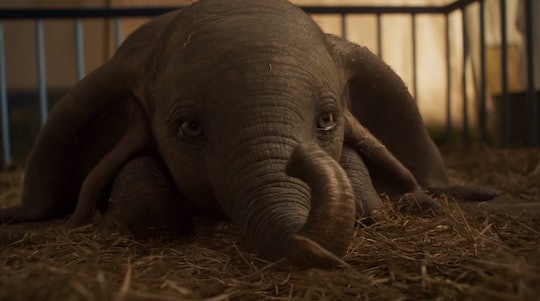 While not all news of movie remakes is met with joy, when a beloved animated classic is getting the treatment I, at least, have a healthy sense of curiosity about it. One of those is currently in the works, with a new live-action version of Dumbo set to release on March 29. But the original version of Dumbo could be a little scary in parts, which leads me to wonder if the new Dumbo is appropriate for young children, specifically under 5 years old. Th quick answer: it’s probably not the best choice for your movie night with your little ones.

The original version of Dumbo gets mixed reviews when it comes to the right age for its viewers. Common Sense Media officially lists it as appropriate for 6 years old and up, while the parental reviews on the site say it’s OK for kids 5 and up. But several parents were concerned about some racist stereotypes within the 1941 film, as detailed by Mic, and one parent noted that it was simply too sad for her 3-year-old.

In its preview for the new Dumbo, Common Sense Media points out that this reimagining should do away with the racist overtones “while keeping the positive messages about family and appreciating differences." And according to the movie's website, Dumbo is rated PG, which means the movie may contain "material parents might not like for their young children."

If the screenwriters hewed close to the storyline of the original though, they can’t do much about the fact that parts of Dumbo are a sad story, indeed. The little elephant is teased about the size of his ears and his mother is taken away from him; it’s a tough tale in some parts.

There was also an incredibly odd sequence in the original with infamous pink elephants. It’s part of a scene in which Dumbo drinks from a vat of water into which clowns had accidentally tipped a champagne bottle. That scene was instrumental to Dumbo figuring out he could fly, so it’s unclear if they’ll leave it in this version.

From the trailer, though, it looks like producers have come up with another way for Dumbo to learn he could fly. Still, the new movie's unknown elements like these that lead to one to say this is not a recommended movie for kids under 5, if you want to play it safe.

The other question about this live-action version is how Tim Burton chose to film it. He’s known for a gothic, dark style, as evidenced by his versions of Alice in Wonderland and Miss Peregrine’s Home for Peculiar Children. From the trailer for Dumbo, it doesn’t look like he’s going with his signature style, but instead has made this film for a wider audience.

The film’s IMDb page doesn’t give away much about the plot, saying “A young elephant, whose oversized ears enable him to fly, helps save a struggling circus, but when the circus plans a new venture, Dumbo and his friends discover dark secrets beneath its shiny veneer.”

CinemaBlend noted that there is a human character who appears to be an outright villain, played by Michael Keaton. He portrays a money-loving businessman who sees a cash-cow in Dumbo. Other roles are played by Colin Farrell, Danny DeVito, Eva Green, Alan Arking and Nico Parker.

Movieweb had early reactions to Dumbo and based upon the comment it looks like this is going to be a solid family tale. One reviewer said, “#Dumbo had a blessedly surprising pro-animal rights agenda wrapped in a subtle, rebellious meta-commentary on a band of outsiders shaking up a corporate establishment.”

So, due to the sad moments in this story, in the end you might want to have very young viewers sit this one out. Or at least wait until you can watch it at home, so it's not as overwhelming as it may be on the big screen. But for the rest of the family, it looks like this will be a fun day at the movies.

Look for Dumbo in theaters March 29.