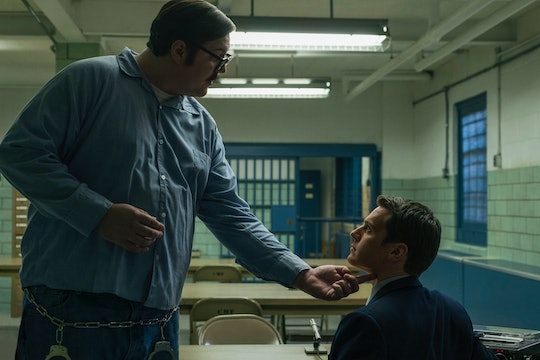 'Mindhunter' Delves Into The Mind Of A Very Real Killer

Netflix's new original series Mindhunter had the perfect premiere date — Friday October 13 — though it's definitely not your typical "serial killer" show. The show is about real life FBI agents in the 1970s investigating what makes a serial killer tick, though that term wasn't even coined yet. To get to the bottom of that, one of the agents interviewed the Co-Ed Killer in prison. So is Ed Kemper from Mindhunter a real serial killer or is all of this just purely fictional?

Let me assure you that Kemper is very, very real, as are several other characters in the show. Mindhunter is based on the book Mindhunter: Inside the F.B.I.’s Elite Serial Crime Unit by John Douglas and Mark Olshaker which was then adapted into a screenplay by British playwright Joe Penhall, who wrote the first season of the Netflix series with Jennifer Hall. And it's produced by David Fincher and Charlize Theron (Fincher also directed four episodes), so you might have an idea of how visceral and tense the show is.

But don't worry — there are no Seven-esque heads in boxes or sloths or anything too scary in the show. Instead, it's more dialogue-based, as the two cops, Holden Ford (played by Jonathan Groff) and Bill Tench (played by Holt McCallany) sort of team up in their mission and interview these killers to figure out why they act the way they act. The most unsettling of these interviews by far is the one with Ed Kemper.

Kemper is very real and also very self-obsessed, as one of the cops jokes in the episode when the agents ask if he'd be willing to talk. "Try stopping him," the officer says. But do you really want to hear what this guy has to say? Once you hear his story you sort of can't un-hear it.

Kemper, then 24 years old, was arrested in April 1973 after turning himself in for the murders of his mother, her best friend, and six female students (hence the "co-ed" moniker), according to Psychology Today. He was extremely troubled throughout his life. Kemper was reportedly abused by his mother throughout his childhood — sometimes she would lock him in a dark closet for days — and was eventually sent away to live with his paternal grandparents in North Fork, California. He alleges that they were also abusive.

According to the New York Post, when he was 15 years old he shot his grandmother in the head "to see what it felt like" and also his grandfather. He was sent away to a juvenile facility for the criminally insane, but then released to his mother after just five years in 1969, whom he hated. Things just went even worse from there.

Between May 1972 and February 1973, Kemper picked up six hitchhiking students, all women, killed them, cut off their heads and then proceeded to have sex with their corpses. He would take the heads home and have sex with them, too. How do we know all this? Because Kemper liked to talk.

Not only did he hang out in a cop bar before turning himself in, he admitted to all of his crimes, in detail, during his confession and trial, and in in-depth interviews with Front Page Detective in both 1973 and 1974. On Good Friday 1973, he killed his mother with a claw hammer and had sex with her decapitated head, according to Psychology Today. He also strangled her friend. Later, when no one reported the murders, he called the Santa Cruz Police Department, but since he hung around the police officer's watering hole and knew some of the men, no one believed him at first.

He was charged with eight counts of murder and given a life sentence because of a stay on the death penalty in California. He had his last parole hearing in 2007, and has asked the prison to put off other ones, according to the DailyMail.

Kemper was supposed to have one in 2012 and in 2017, but his attorney said he's just fine locked up. "His feeling is that he — and this is his belief — no one’s ever going to let him out and he’s just happy, he’s just as happy going about his life in prison,” Kemper’s attorney, Scott Currey, told the parole board in 2007 during his hearing at the California Medical Facility in Vacaville, where Kemper remains, according to the New York Post.

After watching the depiction of Kemper on Mindhunter, it's evident the series delivered an accurate representation of the real man. But that doesn't make it any less terrifying to know that people like this exist. Thanks for the nightmares, Netflix!