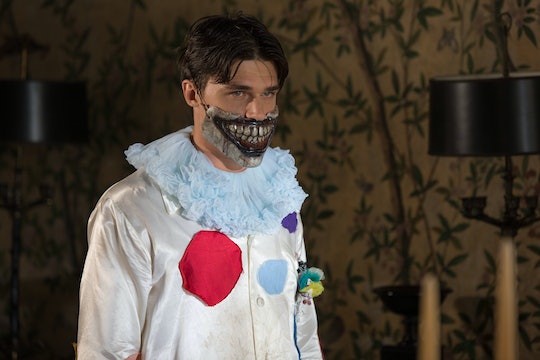 American Horror Story: Roanoke has been all about the connections to past seasons. From the subtler ones to the more overt parallels, there is plenty that suggests the sixth season is bringing things full circle. But the latest connection is the most direct one yet. Edward Mott, the original builder of the house on the cursed Roanoke land, was introduced – and he shares a name with a certain Freak Show villain. But is Edward Mott related to Dandy Mott on American Horror Story: Roanoke?

Edward Philippe Mott was first mentioned by Elias Cunningham during his explanation of the cursed house's history on last week's "Chapter 4." Edward, who unknowingly built the house on the land to which the Roanoke colonists were eternally bound, was the original owner and the first of many occupants to mysteriously disappear or turn up brutally murdered.

On tonight's episode, "Chapter 5," we finally met the Edward Mott in question. He was a relatively-out gay man ("relatively-out" in the sense that he made out with his male lover publicly in front of a small crowd of very judge-y people) and an *extremely* avid art lover who fell victim to the Butcher and her followers. Naturally, the Butcher was none too pleased that someone had trespassed on "her" land, so she brutally killed Edward, burning him alive and hiding his body. In an unfortunate twist, Edward's slave/lover, Guinness, was blamed for Edward's disappearance.

Show creator Ryan Murphy actually told us earlier this season that AHS: Roanoke would delve into the history of Dandy Mott's family. The historian appearing on "My Roanoke Nightmare" actually referenced Dandy indirectly, explaining that madness always ran in the Mott line, until it ended in scandal when the last Mott died in Florida in 1952. This, we know, was Dandy.

If you recall, in the fourth season, Dandy's family history was addressed by his mother, Gloria Mott, in the sixth episode of that season. She theorized that Dandy's "eccentricities" (to put it super, super mildly) might be rooted in the fact that there was just a ton of inbreeding and madness in the earlier generations of the Mott family. She never mentioned Edward Philippe Mott, though.

Of course, there's one other reason that we're all freaking out about the introduction of Edward. He's played by none other than Evan Peters, a fan favorite AHS actor who appeared in a major role in every single season thus far.

Fans were up in arms over the fact that Evan Peters went completely unseen for the entire first four episodes of the season. The latest he'd ever been introduced in prior seasons was the second episode, so viewers were perplexed and a little bit peeved that Peters didn't show up at all for so much of the season.

Now, at least, we've gotten our dose of the actor – however surprisingly brief and minor his appearance as Edward Mott may have been.