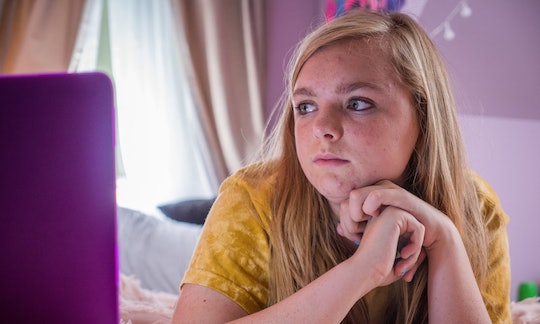 Bo Burnham's directorial debut aired at Sundance earlier this year to critical acclaim, but now that it's in limited release around the country, parents may be wondering: is Eighth Grade appropriate for eighth graders to see? It seems like the film itself directly challenges the premise of that question. The movie landed an R-rating from the MPAA, which ironically means that eighth graders can't even see it in theaters without a parent accompanying them. But maybe that's the point.

As IndieWire notes, the film is self-aware about the fact that it was going to get an R-rating and Burnham, who also wrote the script, never intended to write a film that would earn him a gentler PG-13 rating. Eighth Grade contains five utterances of the word "f*ck," which would only be allowed once in a PG-13 movie. It also confronts oral sex when the film's protagonist, Kayla Day, scrambles to look up YouTube tutorials for blow jobs when she is given to understand that teasing sex is the only way to get and keep her crush's attention. She gets gets frustrated and grossed out pretty quickly, and the whole scene is a commentary on how girls are forced to wield their sexuality in order to get basic needs (like human interaction) met when they don't really want to. But of course, "sexual material" earns the film an R-rating, too.

Reviews of the film by adults and adolescents alike unilaterally agree that it's an accurate portrayal of eighth grade, with people who actually look like eighth graders navigating real-life eighth grade struggles, which include issues of sexuality. So the question doesn't really seem to be whether the movie is "appropriate" for them, but whether parents are ready to discuss challenging emotions openly with their young teens, which isn't always the case. For his part, Burnham, who also wrote the script, definitely relates to the subjects he's trying to capture, telling Trevor Noah in an interview on The Daily Show, "I just set out to talk about how I was feeling and then I found out that I was feeling like an eighth grader."

I was having panic attacks on stage regularly, which is chill. I would talk about my specific anxieties of being on stage performing, thinking that they were specific to what I was at the time, a 25-year-old male comedian with an audience. I would do my shows and talk about that and 13-year-old girls would come up to me after and say "I feel exactly like you do," and I would go, "What?!" If there was a bridge I had to walk to make this movie, it was built by them to me. I felt understood by eighth grade girls. People always said, "Oh, he's just a comedian for eighth grade girls," and at a certain point, I was like, hell yeah I am! And I made a movie.

Ultimately, the film seems deeply invested in showing eighth graders empathy and compassion by reflecting their experiences back to them truthfully and respectfully. Eighth Grade might be well-worth a watch for everyone.