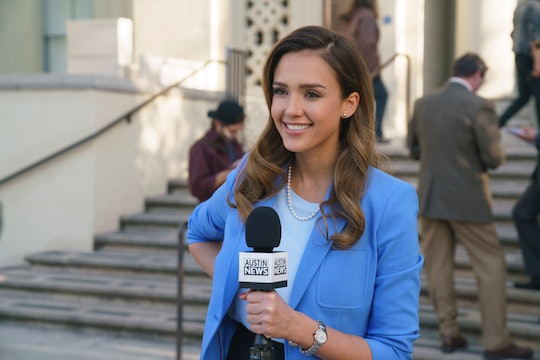 Usually, holiday movies are sentimental and family friendly. But if that's not what you're looking for, then Netflix's new holiday movie is right up your alley. In fact, some of the family dysfunction and small town antics might even have you wondering if El Camino Christmas is based on a true story or not. Thankfully, the movie is set in a fictional town and tells the story of Eric Roth (played by Luke Grimes) who goes to the desert town to meet his dad, played by Tim Allen, for the first time ever in light of the holiday season.

When his father turns him away at the door, Eric follows him to a liquor store, where — thanks to being mistaken for a drug dealer — hilarity ensues for the holidays. Once you finish it, you'll be thankful that the dark comedy isn't based on true events. The film was 10 years in the making and brought back into action by cowriters Chris Wehner and Ted Melfi, the latter of whom is best known for his widely successful (and Oscar-nominated) film Hidden Figures.

Although the film isn't based on a true story, the original script was called Warm Beer back when it was first thought up 10 years ago and, according to Wehner, some of the characters are based on people that he's met in his life.

Wehner once worked with Vietnam veterans, one of which was a heavy drinker. He told Screenwriters Utopia:

At least one of the stories his character tells in the movie is true about the war and what happened with him. So anyway, I started with the Vietnam vet character and Eric, and wrote a simple story about a liquor store hold-up; because Larry goes into the liquor store with every intention of robbing it and a crazy situation happens. It was kind of a Die Hard in a liquor store.

Over the years, the script evolved and changed, until he met Ted Melfi's brother, Phil, and was hooked up with the award winning filmmaker and they turned it into El Camino Christmas. The comparison to Die Hard is pretty apt — since that action film, too, for some reason, has become a holiday classic, even though it has very little to do with Christmas except that its set in December.

After overdosing on sappy Christmas movies all season, sometimes that's exactly what you need. Shepard told CBS that it's a very "offbeat" film, but that he was pretty excited for the world to see it. Especially his facial hair. He said:

It's set in a small border town, revolving around a shoot up at a liquor store — very Christmasy. My character has a mustache. That's what I can tell you about my character. To my surprise, it was a pretty bushy, full mustache. I had reservations it wouldn't be as full as I hoped, but it really came through, especially on the big screen.

It's also great to see Tim Allen in a role that fans don't often get to see. This is the second Christmas movie Allen's starred in. You might remember him as The Santa Clause, a guy who accidentally kills a man in an elf suit and then has to be transformed into St. Nick himself to atone for his sins. This time, Allen plays a deadbeat boozehound, which is sort of a far cry from "Tim the Tool Man Taylor" and other sitcom roles he's taken on.

This film's been a long time coming, but I have a feeling that it's already going down in the pantheon of not-very-Christmasy classics.