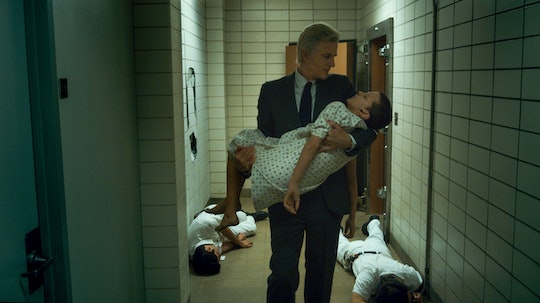 Is Eleven's Real Name Jane On 'Stranger Things'? It Would Make A Lot Of Sense

(Warning: This post contains spoilers from Episode 8 of Stranger Things.) Eleven is one of the biggest mysteries on Stranger Things. When she first shows up, covered in dirt and wearing a hospital gown, there's no telling who she is or where she came from. Eleven is the name she goes by because that's the number tattooed on the inside of her arm, the one that was given to her in Hawkins Labs by the doctors and scientists who experimented on her. But there are hints that she may have other origins – and another name. Is Eleven's real name Jane on Stranger Things?

Theories about Eleven's real name spring from a woman named Terry Ives who worked with Hawkins Labs in the past. She volunteered for experiments where she would be given LSD and placed in an isolation tank in an attempt to open her mind and perhaps allow her to do incredible things or access unexpected abilities. At the time, she had no idea she was pregnant. Though her sister claimed Terry miscarried the baby, Terry insisted that she had given birth to a child named Jane who did have special powers – special powers a lot like Eleven's. Terry went on to accuse the lab of stealing her child and performing abusive experiments, but she was never believed.

The series never fully reveals just where Eleven came from, but it would make a lot of sense if she was Terry's missing daughter Jane. There's never official confirmation that Jane really did die and Hawkins Lab isn't above faking someone's death; they even went so far as to create a fake body to cover up what happened to Will. Dr. Brenner is connected to the experiments Terry underwent and the experiments Eleven suffered through. It's more than possible that when he found out baby Jane was born with special abilities, he jumped at the chance to exploit her for his own purposes. And those special abilities? Apparently they were telepathy and telekinesis, just like Eleven.

It's clear by the end of Stranger Things' first season that the story isn't over, and there's a lot more to Eleven's part in it than audiences know. The lies at Hawkins Lab run deep and they're only just beginning to be exposed. If Eleven really is Jane Ives, then she isn't as alone in the world as she might have thought; she still has a family out there, even if her mother is currently catatonic. And whether Eleven is Jane or not, Hawkins Lab is at the heart of what happened to them both.