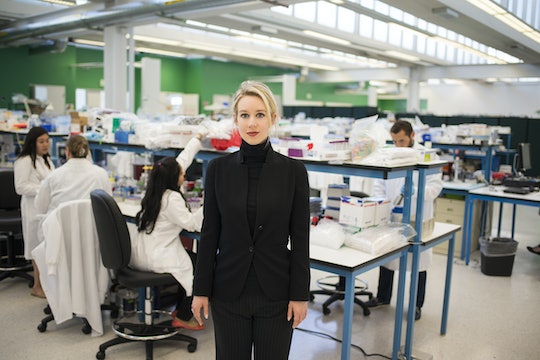 Elizabeth Holmes' Shocking Story Is The Basis Of HBO's 'The Inventor'

The Inventor: Out for Blood in Silicon Valley, which premieres on HBO on Mar. 18, explores one of the most bizarre schemes in recent memory. Elizabeth Holmes' meteoric rise as an innovator in blood testing was followed by an equally swift downfall when it was revealed that she hadn't exactly been honest with people about what she was selling. In June 18, she was indicted on fraud charges, but is Elizabeth Holmes in prison now?

Representatives for Elizabeth Holmes did not immediately respond to Romper's request for comment. But according to Esquire, Holmes is still awaiting trial. After pleading not guilty to two counts of conspiracy to commit wire fraud and nine counts of actual wire fraud, Holmes was released on bail. The date of her trial has yet to be decided. Per Vanity Fair, she's currently living in a "luxury apartment" in San Francisco.

But how did it get to this point? As explained by ABC News, Holmes founded a company called Theranos that purported to be able to run multiple lab tests using a drop of blood. It was revolutionary to imagine that such a small amount of blood could actually offer answers to patients. But it was too good to be true; the device that was supposed to test the blood rarely, if ever, worked.

Though the product wasn't functioning correctly, Holmes continued to search for investors to inject some cash into the company. ABC News reported that she eventually accepted a $20 million loan from Ramesh "Sunny" Balwani in 2009. Balwani had been a software executive who worked with Microsoft and Lotus, which made him an odd choice for a company related to medical testing. Regardless, he became the COO and president of Theranos. In 2018, he was also indicted on fraud and is similarly awaiting trial.

As reported by ABC News, Holmes opened Theranos Wellness Centers in California and Arizona; the company struck a $140 million dollar deal with Walgreens to get their blood-testing device in stores. They continued to land more investors who gave them millions, like Rupert Murdoch and the DeVos family. But the technology apparently still wasn't working and the company was reportedly falsifying results to make it seem otherwise. A former Theranos lab associate named Erika Cheung told Nightline, "It really started to eat me up inside. They really violated the basic and simple principle that I had guiding me as a scientist, as just a human being."

Research engineer Tyler Shultz, grandson of Theranos board member and former Secretary of State George Schultz, had concerns as well. Per ABC News, he shared with Holmes and Balwani. When that got him nowhere, he reportedly spoke with investigative reporter John Carreyrou, who was able to publish an exposé of Theranos and reveal the company's faulty testing. Soon enough, everything fell apart.

Holmes and Balwani's claims about what Theranos was capable of doing, as well as the incorrect data, led to the fraud charges. Being charged with "wire fraud" means that the fraud occurred over the phone or involved "electronic communications," according to the website FindLaw. It also means that the defendant intended to defraud someone of money or property.

If convicted, both Holmes and Balwani could be in prison for 20 years. But until their trial, they're both in limbo — though ABC News reported that Holmes is already working on a new venture.