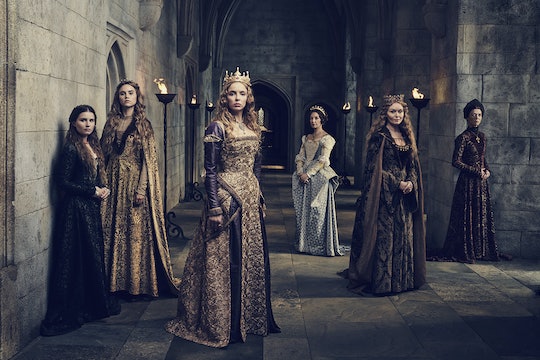 Elizabeth Worries For Her Brother On 'The White Princess'

The White Princess wastes no time in settling into the Tudor-era drama. When the series begins, King Richard III has just been killed. This not only devastates his niece — and apparent lover — Elizabeth of York, but this means that she must marry the man who defeated him. Turns out, it's a member of the rival House Tudor, Henry VII. This ends the War of the Roses, but that doesn't mean the animosity or bloodshed is over. Early in the premiere, Elizabeth's brother, (also named Richard), seems to go missing. So is Elizabeth's brother alive on The White Princess? The young boy's fate is currently up in the air.

To clarify, since royals love to use the same few names over and over, Elizabeth's brother's full name was Richard of Shrewsbury, Duke of York. After Richard III's death, the York family fled their home but left the Duke there. His and Elizabeth's mother, Elizabeth Woodsville (sensing a theme with the names?), hears later that her confidant Jan Werbeque had not seen him. Ned, a worker for the royals, explained that soldiers who raided the Yorks' home were told to slaughter any boys they found there (since they could prove to be a threat to Henry's claim to the throne... but it's unclear if any boys were found and slaughtered or if young Richard had managed to escape.

Like I said, Richard of Shrewsbury was a threat to Henry VII's crown, so there's reason to worry that he's missing. The White Princess is based on the true royal family — so was this Richard even real? As it turns out, yes. If you've ever heard of the phrase "princes in the tower," it refers to Richard and his brother, Edward V. They were 9 and 12-years-old when they passed away, respectively, but the cause of death was never solved. In 2015, The Independent reported that researches were taking on the 500 year cold case. They argued that there were several suspects for their murders, including Henry VII and Richard III. That would not fit with The White Princess timeline, but it's certainly an interesting detail.

In real life, Richard tragically died, but that may not be the case on The White Princess. Ned revealed to Elizabeth Woodsville that the Queen Mother, Margaret, set the order to kill any boys that the soldiers found. If the soldiers went through with their orders, Richard's fate is sealed. Viewers, however, are still left wondering at the end of the premiere if maybe the boy had fled before being spotted. Perhaps they will go a different direction than history itself did, and Richard will live — and therefore be a threat to Henry's reign. Hopefully, the show will reveal what happened sooner rather than later.