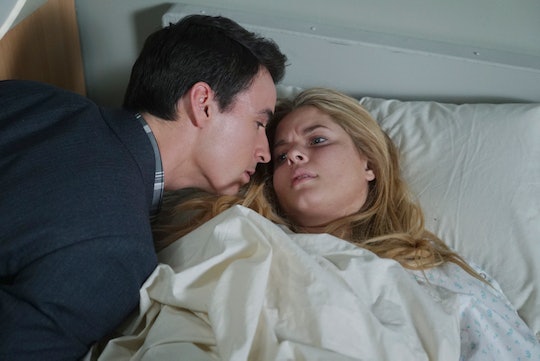 Is Elliot Rollins Dead On 'Pretty Little Liars'? We Finally Know Who The Liars Are Burying

Over the years, there have been a lot of villains on Pretty Little Liars. From Mona to Jenna, to all the various 'A' suspects, one could never trust anyone on PLL. But Elliot Rollins was one villain that may have topped them all. Slithering his way into Charlotte and Ali's lives and then committing Ali to the psychiatric hospital took skill and patience. Of course, PLL fans were suspicious of him on sight, but the Liars themselves took a while to catch on. However, on Tuesday night's episode the Liars finally began to put two and two together, and Elliot Rollins finally met his demise when he came face to face with Hanna's windshield. But is Rollins dead on Pretty Little Liars?

Although it's sometimes hard to be sure if a character is really dead on Pretty Little Liars, the death of Elliot Rollins seems like a pretty open and shut case. Alison, in probably her smartest move to date, used Elliot's own phone to tell the Liars where Elliot was taking her. It's unclear what Elliot's intentions were but one can assume things weren't going to end well for Ali. With Elliot's location in hand, the Liars set out to find (and rescue) Ali from her husband's evil clutches.

Thinking on her feet, Ali was able to pretend that she was knocked out the whole time she was in the car with Elliot. Waiting for the perfect moment, Ali knocked Elliot over the head so he hit the steering wheel. Wasting no time, Ali jumped out of the car and made a mad dash for it, while the Liars were still on the hunt. Just as the Liars were pulling up on the scene they saw Ali running, with Elliot close on her heels. With Hanna at the wheel the Liars then drove straight into Elliot, and Hanna find herself looking straight into Elliot's cold, dead eyes.

In this situation the logical thing to do would be to immediately call the cops and tell them what happened. It was, after all, an accident. But this is PLL and nothing the Liars do is ever that logical. Therefore it's now clear that it's Elliot the Liars end up burying this season. The only question that remains now is, will they actually get away with it?