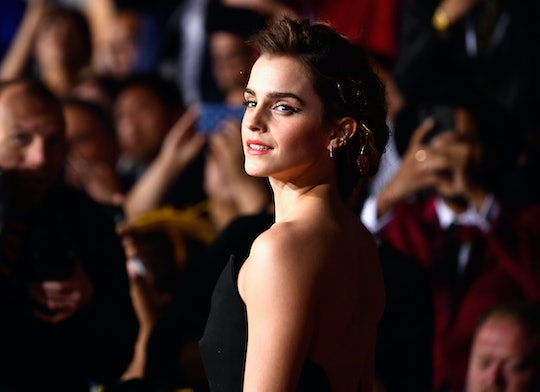 Emma Watson's Voice Stands Out In Her New Film

With the release date of the live action adaptation of Beauty and the Beast drawing closer, fans are bound to be wondering about the music in the film. The songs from the iconic Disney animated version are as embedded in many people's childhoods as it's possible to be, and there are tons of people who hold those songs near and dear to their hearts. Fans will want to make sure all of their favorite tunes have a place in the film, but also that the film does them justice. There have been a few snippets of the songs released in trailers and promotional material, leaving some wondering: is Emma Watson really singing in Beauty and the Beast?

Watson did do all of her own singing in the film, and it was definitely a daunting task for her. "I sing, so that's really unexpected," she said in an interview with Total Film. "I've never had to do that for a film role before, and I think people will be interested to see me do something very different like that... It gives me a different challenge, really. That's terrifying in and of itself!"

Watson grew up with the songs, too, so it was surreal for her to be performing them for the movie, though it was an exciting prospect, too. "My six year old self is on the ceiling – heart bursting," she said. "Time to start some singing lessons. I can't wait for you to see it."

Disney has made a few clips of Watson's performances in the movie available, and while there isn't a lot to go on, the clips do provide fans with a hint of what her version of Belle will sound like. In one thirty-second, audio-only snippet, Watson performs "Something There," the song in which both Belle and the Beast realize their changing feelings for one another. Another clip from the film's iconic opening number "Bonjour" gives a fuller picture of Watson's Belle as she prances through town, but there isn't quite as much singing on display as fans might have hoped for.

According to her co-star Luke Evans, who plays Gaston, some of the film's singing was done live, too. "We pre-recorded every [song], but some of us sang live on set as well, during the takes," Evans told Collider. "We were mic'd and they recorded that and I think afterwards, in sound, they'll be able to choose whether the live version is better than the pre-recorded version. We'll never know!"

Watson may have felt singing on film for the first time was an intimidating undertaking, but fans will be able to check out Beauty and the Beast on March 17 and judge for themselves whether or not she rose to the challenge.