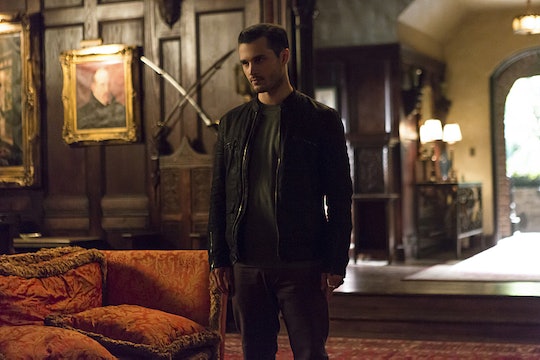 Things Got Intense For Enzo On 'TVD'

Someone please pinch me and wake me up from this nightmare situation. But first and foremost: poor Bonnie. Just when she was the happiest she's ever been, it was all taken away with a flick of the wrist — or rather a heart pull from the chest. While Bonnie was extracting the cure from a still comatose Elena, Stefan came up behind Enzo and pulled out his heart. But is Enzo really dead on The Vampire Diaries? Let's just say things aren't looking good.

Normally, when it comes to this show, I'd say that anything is possible, given the amount of times people have quite literally come back from the dead. However, Stefan legit ripped Enzo's heart directly from his chest. There's never really ever been a way of coming back from that. Well, except if you're Cade, of course. And since Enzo is not the devil, I'm afraid we may have lost him for good. You'd think fans would be used to losing characters like this by now, and yet I am completely shocked. This isn't even the first big character to be taken from us this season. (Remember when Damon killed Tyler just as suddenly?) And here we are again with another heart-wrenching (sorry, bad choice of words) moment.

Even for the promo for next week's episode showed Bonnie laying Enzo to rest and grieving over the loss, which feels like an even further confirmation that he's no longer of this world. Granted, there's always the chance they could make some sort of deal with Cade to bring him back, but with just five episodes remaining until the season comes to a close, I'm not so sure there will be time for that. Plus, Bonnie always has the worst luck in the world.

Honestly, it was just as heartbreaking to see Bonnie's reaction to his death than the actual death itself. Bonnie has given up so much for the good of the group, and she was about to do just that yet again by having Cade take the cure rather than Enzo. And this is how she gets repaid for it. In fact, now that I think about it, I really should've seen this coming. Bonnie has been way too happy lately. But now all of that has changed. And regardless of how sorry may end up being now that he's human again, there's no taking back what he did. As painful as it is, I fear this really was the end of the road for Enzo.