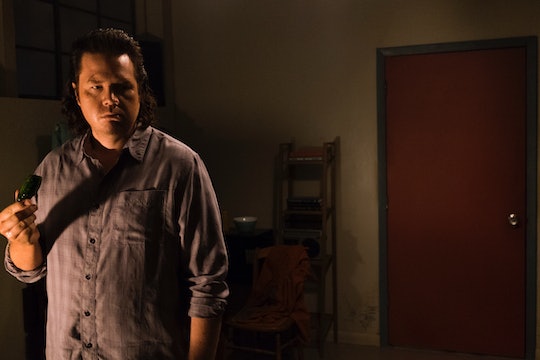 Eugene's Gone Over To The Dark Side On 'TWD'

Two characters on The Walking Dead have found themselves trapped behind enemy territory in Season 7: first Daryl, and now Eugene. Both of their experiences when held captive by the Saviors were entirely different, and revealed quite a lot about them. Daryl refused to give in and found himself subjected to indignity after indignity before launching an escape, whereas Eugene made himself comfortable for the long haul. At the end of "Hostiles and Calamities," Eugene was proclaiming that he too was Negan, giving up his identity for safety. But is Eugene a Savior on The Walking Dead? Or is he faking it?

It was difficult to tell in the episode just how genuine Eugene's transformation was. At first he definitely seemed to be playing the odds, even smirking as he walked away from a confrontation with Negan, but things changed after watching the Sanctuary's doctor be immolated alive. Witnessing that gave Eugene a change of heart and when it came time to swear allegiance, he did so without blinking. Eugene may not agree with Negan's motives or ideology, but he would do whatever it takes to stay alive — even if that means becoming a Savior. Eugene's self-preservation was motivated by fear, so he might not be a Savior in spirit, but he'll say what he has to say to survive.

From the time he was introduced, Eugene had always been a character who was willing to do whatever he had to do to survive with the smallest amount of bloodshed. He never had any compunctions about lying if it meant he was protected. But does being a coward make his defection to the Saviors better or worse? He probably isn't on board with the way they do things, but he may be totally fine with faking it if it keeps him alive and comfortable.

There is always a chance that Eugene is just pretending so that he can go on to act as a double agent within the Sanctuary, but even the actor who plays him has no idea what Eugene's plan ultimately is. Josh McDermitt told Entertainment Weekly that he had some ideas, but he didn't know for sure what was really going on and he didn't want to know. Letting it be as much of a surprise for him as it is for the audience keeps things fresh and helps prevent his overall performance from giving too much away. "[Eugene is] a man who's had to change and adapt to survive throughout every turn of this apocalypse, and this is what he's continuing to do," McDermitt said.

It's possible that Eugene could have some big master plan in the works, but he might just be trying to survive one day to the next, hoping that at the end of everything he makes it out unscathed.