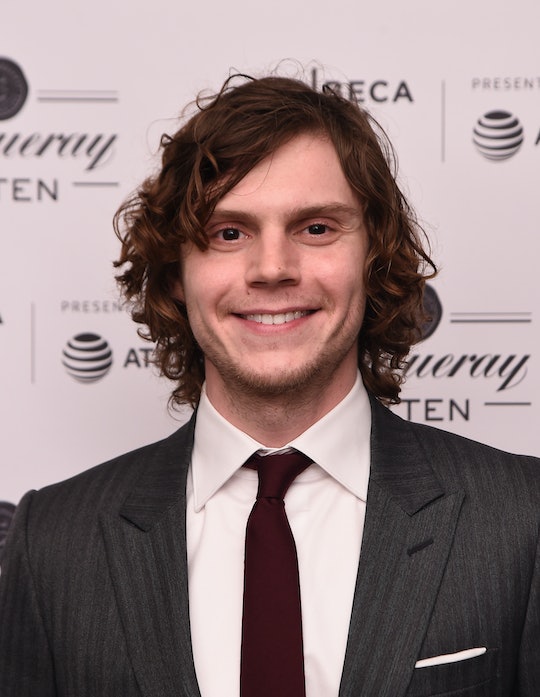 Evan Peters Will Take On Historical Figures In 'AHS: Cult'

Not much has been made clear about the story and characters of American Horror Story: Cult, but some details have emerged as the Sept. 5 premiere draws closer. Evan Peters will be playing an alt-right, Trump-supporting cult leader named Kai Anderson who manipulates Winter into infiltrating the house of married couple Ally and Ivy, in an attempt to drive a Trump-hating Ally mad. So much of the season is grounded in reality because of its 2016 election inspiration, but is Evan Peters' character from AHS: Cult based on a real person?

While Ryan Murphy may have taken some tips from President Trump's fanbase in crafting Kai, the character doesn't appear to be based on any one person. That being said, Kai isn't the only character Peters will be playing: he'll also be taking on a bevy of roles based on real people, all of whom became cult figures (literally or figuratively) throughout history. Murphy told Digital Spy, "[Peters] is playing Kai, this cult leader in this small town who we follow as he rises. And the thing that we're doing is we're really examining all different sorts of cults. And there are many, many famous ones. Throughout the season, Evan Peters is, I think, playing six different cult leaders: Kai, [Charles] Manson, David Koresh, Andy Warhol. Jim Jones is a big one."

In Murphy's view, each of those people took advantage of their specific cultural climate to accrue followers, people who were scared and desperate for someone to lead them. Fans had been wanting to see Murphy and Peters take on Charles Manson for years, as he is perhaps the first person people think of when they hear the word "cult." Manson famously convinced his followers to kill Sharon Tate and six others in a series of murders spread out over two nights.

But Jim Jones is just as well known for the horrors that occurred at his compound Jonestown in Guyana. Visiting politicians and reporters were gunned down by cult members before all 909 Jonestown inhabitants committed mass suicide. Koresh led a cult called the Branch Davidians and considered himself a prophet. Child abuse ran rampant in the cult, whose center was raided by the FBI in 1993, resulting in a stand-off and the eventual death of many in a fire, Koresh included.

Andy Warhol may seem like an outlier (he certainly never killed anyone), but he was instrumental to the idea of a "cult of personality" that is one of Season 7's major themes. And his exclusion of certain people from his club did have near-deadly results: he was shot by Valerie Solanas, which may be dramatized for Cult. "Lena Dunham is playing Valerie Solanas, who attempted to shoot Andy Warhol because she felt denied the cult of personality that was Warhol and the Factory at the time," Murphy told Entertainment Weekly.

It looks like American Horror Story: Cult will be taking advantage of Peters' considerable talents to explore the many ways people are exploited and controlled — and the many people over time who have done the exploiting.