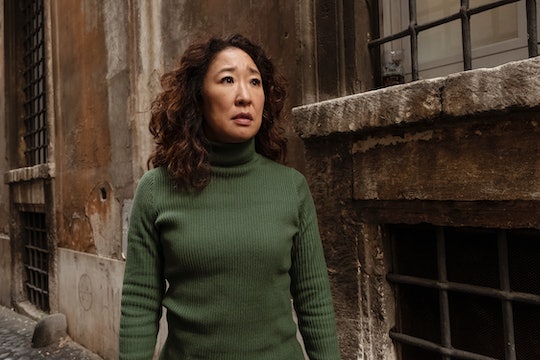 If you watched the Season 2 finale of Killing Eve I imagine right now you're feeling about as antsy as an MI6 agent rationalizing her psycho-sexual feelings for a particularly glam psychopathic assassin. The episode ended with a literal bang and now everyone is wondering: is Eve dead?

Warning: spoilers ahead for the Season 2 finale of Killing Eve, "You're Mine."

Eve Polastri ended the second season of Killing Eve bleeding out in a Roman ruin after Villanelle shot her. It mirrored the end of Season 1, when Eve plunged a knife into Villanelle's stomach. But even though she was wounded, Villanelle was immediately able to make a run for it, leaving audience assured that she'd make it out alive somehow. Eve wasn't quite as sprightly. Would Killing Eve really kill off its main character?

If I had to hazard a guess, I would say no. It would be a bold move for the series to kill off its biggest star, but it would also be a move without purpose. Sandra Oh's portrayal of Eve is an important part of the show, as is Eve's complicated relationship with Villanelle. If you removed a key element of that dynamic, then Killing Eve isn't Killing Eve anymore. It's something else entirely. Lately shows have been feeling brazen about axing their protagonists — I'm subtweeting The Magicians here — but it's just too impossible to imagine Killing Eve without Eve.

The cast and crew are playing coy about her fate, however. In various interviews, Oh and executive producer Sally Woodward Gentle didn't want to destroy the cliffhanger by offering up tidy answers. But that didn't stop either of them from speculating about where Eve's story might go in the already-renewed Season 3.

While speaking to Entertainment Weekly, Oh emphasized the fact that she didn't know if Eve would survive; the third season was still in the process of being planned and written, so she didn't have an answer. "Anything after that shot is really for the next season," Oh said, though she didn't think Eve was only pretending to be dead, like Hugo had earlier in the episode. "Either she is dead, or she's lying there shot. And bleeding to death."

Whether or not Eve lives or dies, she was badly wounded, though it was difficult to see where the bullet hit her. There appeared to be a small pool of blood forming under her torso in the episode, but Oh referred to the bullet being "somewhere in her back, and in her body" without knowing exactly where. That may be a detail the writers are still figuring out. One of many: Oh also noted that she and Suzanne Heathcote, the Season 3 showrunner, had been talking "non-stop" about where Eve's story picks up and how she would handle everything that happened to her. Again, if she lived.

Even if Eve was shot in a spot that left her able to recover, it would rely on her getting medical care in time. Does she have a phone to call someone? Is she conscious enough to do that? Is there a chance someone could stumble upon her in those ruins? When is Season 3 premiering?! Audiences are going to be left hanging until then, unfortunately. As Woodward Gentle told Deadline, "There's absolutely no point in going, 'Yeah, and then [Eve] got out and went and had a pizza.'" The finale of Killing Eve ended on a cliffhanger for a reason, and no one who worked on the show was going to spoil it ahead of time.

But the fact that Oh is still discussing the character's arc with the writers seems like a good sign. I don't think Eve is dead, and it feels a little silly to pretend like she might be. But she will be hugely changed by what she went through this year. If Eve is back in Season 3, she might be a different version of herself. One who has completely crossed the line and has to decide what her next step will be.

Editor's note: An earlier version of this article included an incorrect title for Sally Woodward Gentle.