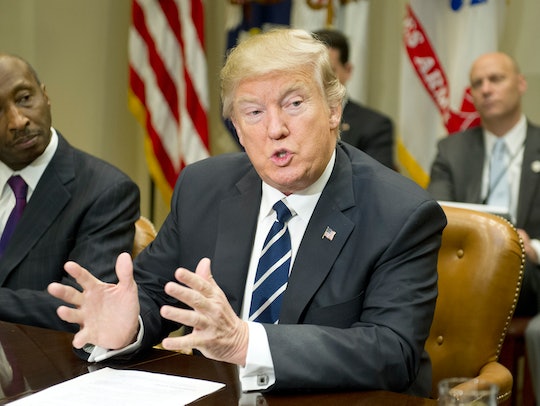 The US Has Used "Extreme Vetting" Before

When President Donald Trump signed in his executive order on immigration last week, he called for the "extreme vetting" of immigrants and refugees from certain Muslim-majority countries, saying he didn't want to let "the very threats our soldiers are fighting overseas" into the country. But would an ideological test for immigrants even be constitutional? As it turns out, according to The Washington Post, Trump's extreme vetting is probably legal.

That hasn't stopped many from declaring the order otherwise. According to Slate, several federal judges ruled on Saturday that Trump's order was unconstitutional, allowing hundreds of detained immigrants stuck at airports into the United States. However, that ruling only affected those who had already touched down on American soil or who were already in transit, since detention meant holding them without due process. So what does that mean for those who have yet to take off for the United States?

"At the end of the day, either you're abiding by the Constitution or you are not," Washington Attorney General Bob Ferguson said on Monday, according to the BBC. "And in our view, the president is not adhering to the Constitution when it comes to this executive action."

The Council on American-Islamic Relations and the American Civil Liberties Union have also challenged the order's legality, saying it exclusively targets Muslims. Protestors argue that the order also violates the Fifth and 14th Amendments — which guarantee due process of law — by denying those with valid visas, according to the BBC.

However, this wouldn't be the first time "excessive vetting" has been used in the United States. In the 1940s, the Alien Registration Act was enacted to screen immigrants for communist or anarchist leanings, according to The Washington Post, and even today's existing citizenship test has a civics section.

In his order, Trump also pointed to an immigration law from the 1950s that allows American presidents to deny entry to "all aliens or any class of aliens" if their entry is seen as contrary to national interests. One could point out that a 1965 revision to that law established that immigrants can't be denied visas due to discrimination based on their "race, sex, nationality, place of birth or place of residence," according to the BBC — but since Trump did not mentioned a specific religion when it came to his vetting process, his order could also be protected from accusations of discrimination.

All in all, there's several angles that challengers could use to attack Trump's executive order and his vetting process, and some judges — like former Acting Attorney General Sally Yates — have already begun the process of questioning its legality. Judging from past vetting processes, however, and the omission of certain words, they could have a hard time proving the order unconstitutional in court.