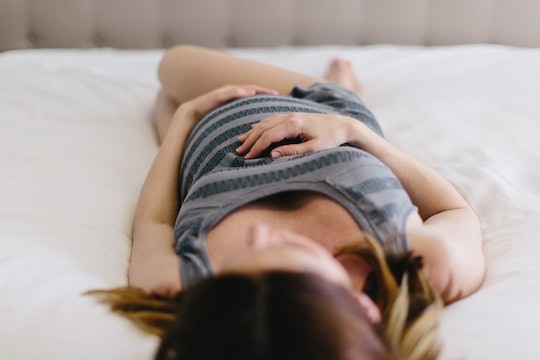 Though Fainting During Pregnancy Is Common, Don't Assume That It's Normal

When I was pregnant with baby number two, I raced to work one morning without having breakfast first. I was running late and figured I'd grab something once my early morning meeting was over. Well, that proved to be a dubious decision, since I nearly fainted mid-way through my big meeting. I felt my knees buckle and my coworkers said I turned white as a ghost. If you've experienced something similar, or worse, it's only natural to wonder if fainting during pregnancy is normal.

The answer is nuanced. While "it is common, it should be never be considered "normal" — meaning that if you or your loved one faints, you should be evaluated by a healthcare provider," Erin Duncan, MD, MPH of Atlanta Gynecology and Obstetrics, tells Romper.

Interestingly, there are several reasons why you might experience dizziness or fainting during pregnancy. If an incident occurs in your first trimester, it might be morning sickness-induced. "Pregnant women often can’t keep food or liquids down and feel weak and dizzy as a result," explained Nicole Todd, an obstetrician in Vancouver, in an interview with Today's Parent.

And throughout your pregnancy, your body is undergoing massive, and impressive changes — several of which can lead to a fainting spell depending on your individual body's response.

"A woman's body takes on double the blood volume to make sure there's enough blood flow to the uterus! This change happens throughout the pregnancy but very early on your blood vessels start dilating to allow for the extra blood to flow," says Duncan "There [is] also increased demand on your heart as a result, and increased sensitivity to fluid shifts, meaning that you can become much more susceptible to dehydration. Finally there is a barometer within your brain that has to adjust to these changes in pressure and volume. Poor response of any of these changes could lead to fainting."

So, fainting during pregnancy could be caused by something as relatively benign and commonplace as your blood vessels expanding, (which can lead to less blood pumped to the brain, and thus the fainting, according to Mount Nittany Health) or it could be a symptom of a more serious health issue. "Fainting could be an indication of a cardiac insufficiency, an irregular heart rhythm, an inappropriate response of the brain barometer ... You should seek medical care to see if any additional intervention is needed," advises Duncan.

Another important thing to consider is that falling during a fainting spell could harm you and the fetus. "Falling and injuring yourself is definitely a risk, and the pregnancy is more vulnerable to traumatic injury after the uterus has grown outside the pelvis (around 16 weeks)," says Duncan. After my near-fainting incident at work, I was worried I'd encounter that woozy feeling again in a more dangerous environment, like say, on the subway platform. Thankfully, I never had another fainting scare, but I always had a snack on hand just in case.

If you feel some dizziness coming on, there are things to do to stop a potential fainting spell from occurring. Try eating small snacks throughout the day to steady blood sugar, and drinking 12 eight-ounce servings of water a day to stay hydrated, advised Verywell Family.

If you notice yourself feeling faint after standing up, making small adjustments to your movements could help. "When you get up from sitting or lying down, do so slowly. Clench and release your leg muscles before and during standing," explained Mount Nittany Health.

It could turn out that a fainting spell isn't a big deal at all, but brushing it off could mean that a larger issue gets overlooked. By far the best thing you can do is to keep your OB-GYN or midwife in the loop if you faint and are having trouble keeping food down to keep you and baby as safe as possible.