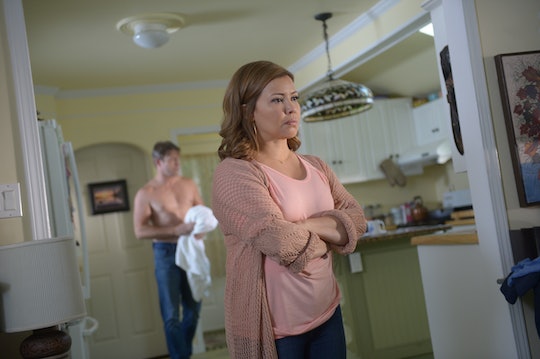 Photo by Courtesy of Lifetime Copyright 2019

More Like This
What To Stream Right Now For Kids Who Love History
Everything There Is To Know About The Friends Reunion
The Great-Granddaughter Of Alice In Wonderland Is Getting Her Own Show
Peppa Pig Is Going Camping In A New Live Show & You’re Invited!

The movie is part of the network's summer series in partnership with Audible in which they adapt bestselling novels to film. This final film of the three (the other two, Tempting Fate and To Have and to Hold, have already aired) has everything a Lifetime movie should have, minus the true story. As far as I can tell, this is a work of fiction, just as nearly all of Green's salacious novels are, but that won't make it any less worthy of your viewing time.

According to the description, Family Pictures follows Sylvie (Justina Machado) and Maggie (Elisabeth Röhm) who are complete strangers, living on opposite sides of the country. There are a lot of similarities between the two women, namely that they both have husbands who work a lot and daughters going off to college. Everything remains "picture perfect," until the girls befriend one another at a college visit. That friendship unravels secrets better left unknown.

What ultimately happens between the two families is something neither saw coming, and it'll change everyone's lives, not necessarily for the better. The network synopsis and book description are very similar, so I'd expect the movie to follow along closely with the novel's storyline and character journeys. Still, none if it was inspired by any particular person, place, or thing. Family Pictures comes from the brilliant mind of Green, who served as executive producer alongside Kim Raver in her directorial debut, Jocelyn Freid, David Fleming, Shane Salerno and Kara Feifer.

Raver joined in on the excitement train adding, "Having been a massive fan of Jane’s books, it’s a dream come true for me and my producing partners to be able to bring these powerful female-centric stories to fruition at Lifetime!"

All the hype for Green's novels is real. Even if you're not a big reader, or you haven't snagged any of her books just yet, the film version is a great place to start. I won't spoil anything that happens once the two girls become friends, but know there's a ton of drama and it's indulgent and addictive in the best ways. With over 20 books written in over 25 languages, Green has mastered her craft beautifully — even if they're works of fiction. Family Pictures might not be a true story, but once you check out the film, I have no doubt you'll want to run the the local indie bookstore and snag a copy of the novel. Until then, set your DVR for Sat. June 29 at 8 p.m. ET.