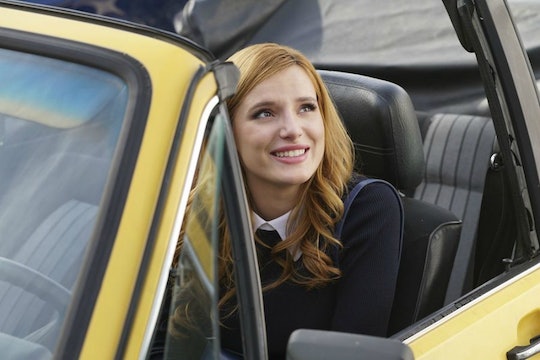 Is 'Famous In Love' Based On A Book?

It's not going to be easy to turn on the TV on April 18 for the beginning of the very end of Pretty Little Liars. Luckily, showrunner I. Marlene King has her fans backs, because there's a brand new show called Famous in Love premiering right afterwards. So if you need to fill the Uber A-sized hole in your heart after PLL, this will likely be it. Like Pretty Little Liars, Famous in Love is based on a book of the same name, written by Rebecca Serle. The story follows the character of Paige — played by Bella Thorne on the show — who is just a regular student until she auditions for a role in a movie.

She lands this huge part in a Hollywood film, but now has to deal with her newfound fame and all the drama that comes with it. The series was developed by King and Serle together, so it will likely follow the plot of the book pretty closely — although there are bound to be a few alterations here and there. The book is a pretty easy read, being a young adult series, so if you're the kind of TV nerd who prefers reading the book, along with spoilers, before binging a new series, you can probably catch up before the premiere in mid-April.

It's not just a coming of age story about a girl dealing with the glitz and glam of Hollywood, though. The main plot follows the love triangle that Paige gets herself wrapped up in. When she starts filming the movie, she's hanging out a lot with Rainer, who will be played by Carter Jenkins. Rainer is the squeaky clean, sexiest man alive-type celeb that everyone loves and Paige could bring home to her family. Then a "troubled" actor named Jordan, played by Keith Powers, is cast in the other role in the film they're shooting (which is also about a love triangle) and his added attractive presence starts to complicate things. The guys both have feelings for Paige and have a messy history together, just to make it even more interesting.

It sounds a lot like fans will have another Team Damon or Stefan (from The Vampire Diaries ICYMI) situation on their hands, picking sides between the "good" and "bad" boy for the girl. But just to make things even more confusing, all of three of them are also trying to figure out what really happened to another missing popstar throughout the series.

Famous in Love is a double whammy: a love story and a mystery. After the premiere, if you're totally hooked, you'll be able to watch the entire rest of the series on Freeform's digital platforms. But you might want to save those for after the series finale of PLL, because you're gonna want something to watch.